You are here: Home / Archives for Missouri State

The Missouri State men’s basketball team used a 10-0 run late in the second half to close out a 76-62 Missouri Valley Conference home win over Bradley, giving the Bears their 100th win at JQH Arena.

The Bears got a game-high 24 points from Dequon Miller, who posted a career high for the second straight game, while Chris Kendrix contributed 17 off the bench, and Alize Johnson notched his 12th double-double with 13 points and 13 rebounds.  Kendrix also posted 4 steals for the home side, which improved to 100-43 in its ninth season at JQH Arena.

Missouri State never trailed after falling behind 2-0 in the opening minute, leading by as many as 16 in the second half to improve to 10-2 at home this season.

Up 41-31 at the break, the Bears opened the first five minutes of the second on a 10-4 run that included a couple of three pointers, pushing the advantage to 51-35.  Bradley rallied to six with 8:38 remaining, but a 10-0 run by MSU pushed the Bears past the Braves. 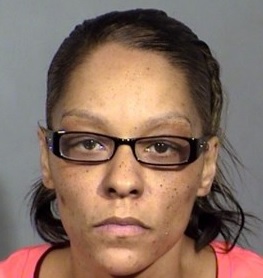 Las Vegas Police arrested a teen suspect and his mother in the fatal shooting of a Missouri State football player Richard Nelson, who witnesses say tried to stop a fight involving his sister in front of their house over the weekend.

Police arrested 37-year-old Tianna Thomas and her 17-year-old son. The teen was charged with murder and his mother was charged with accessory to murder with a deadly weapon after police believe she drove her son from the scene before they arrived. Witnesses told police Nelson pulled a person away from his sister before he was shot.

The Clark County coroner says Nelson died of multiple gunshots.  Missouri State will hold a public memorial service on Sunday, the 29th for in the Plaster Student Union Theater on the Springfield campus, starting at 1 p.m.

Johnson’s 20 rebounds were the most by any Missouri State player since 1990 and matched a program high during its Division I era.

Johnson helped spark an impressive start for MSU, posting 18 points and 10 rebounds in the first half to give Missouri State a 39-26 lead at the half.
In the second half, MSU pushed ahead to their biggest lead of the night, 43-29, on a reverse layup by Obediah Church less than four minutes in.

MSU picked up its third road win of the season and improved to 2-2 in conference games away from JQH Arena. The Bears also swept the regular-season series against Indiana State for the first time since the 2007-08 season.

The Bears will enter the weekend tied for third place in the MVC standings and return to JQH Arena on Saturday to battle Bradley at 2 p.m. on Hall of Fame weekend.

Missouri State University will conduct a public memorial service on Sunday, January 29 to pay tribute to freshman student Richard Nelson who was shot and killed in his hometown of Las Vegas, Nevada on Jan. 14.

The service will take place in the Plaster Student Union Theater on the Springfield campus, starting at 1 p.m.

Nelson, 18, was a tailback on the MSU football team and redshirted during his first year with the Bears. He is a graduate of Chaparral High School in Las Vegas.

Missouri State’s Dequon Miller scored the team’s last eight points and helped lead the Bears to a 55-51 home win over Evansville Wednesday at JQH Arena  in Missouri Valley Conference play. Miller, who finished with 13 points and 5 assists, controlled the game’s last five minutes for MSU, which led by as many as 15 points in the second half. Miller’s 3-pointer with just over five minutes to play ended an 11-3 run by the Purple Aces and gave the Bears a six-point lead.

The Bears will take to the Valley road for their next two conference games, starting Sunday afternoon at 3 p.m. against Loyola

Missouri State got four straight free throws by sophomore Ryan Kreklow in the final 14 seconds to seal a 68-64 road win over Northern Iowa Wednesday in the Missouri Valley Conference opener for both teams.  The Bears (10-4, 1-0 MVC) finished 10-for-11 at the foul line and held off a late surge by the Panthers (5-7, 0-1) who got to the line 20 times.

Dequon Miller led all Missouri State players with 17 points, including a season-high five 3-pointers, while Kreklow scored 13, Alize Johnson added 12, and Jarrid Rhodes poured in 10 points in the Bears’ first win at the McLeod Center since Dec. 29, 2010 – the only other time the teams have played in an MVC opener.  Johnson also posted a game-high 10 rebounds in his seventh double-double of the season.

MSU returns home this Saturday to face Indiana State (6-7, 0-1 MVC) at 11 a.m. The game will be broadcast on FOX Sports Midwest.

Dequon Miller scored a game-high 18 points to lead Missouri State (8-3) past visiting Chicago State, 66-46, at JQH Arena in Springfield on Monday in the second round of the Continental Tire Las Vegas Classic.  MSU outrebounded the visiting Cougars by a 42-27 margin and converted 9-of-11 free throws in the final six minutes to seal a key home victory.

Chicago State (3-9) was led by Trayvon Palmer who had 13 points and 9 rebounds, while Montana Byrd scored 11.

The Bears extended a 38-23 halftime lead to a 21-point advantage right out of the box in the second half with back-to-back 3-pointers from Miller and Jarrid Rhodes.

Missouri State, which improved to 7-1 at JQH Arena this season, now travels to Las Vegas for the semifinals and finals of the Las Vegas Classic, Thursday and Friday at Orleans Arena.

The Bears will square off with No. 23 Southern Cal (11-0) on Thursday at 10 p.m. (Central) on FS1, with the winner advancing to Friday’s championship game against DePaul or Wyoming. The two semifinal losers will also meet on Friday evening for third place, and both of Friday’s game will also air on FS1.

Missouri State (6-3) tied a JQH Arena record with 25 offensive rebounds and got a double-double from junior Alize Johnson to lead the Bears past visiting Oral Roberts, 86-76, on Wednesday.  Johnson scored 20 points and snagged a career-high 16 rebounds in his third straight double-double effort and fifth for the young season. Jarred Dixon also contributed 15 points off the bench for MSU, helping the Bears accumulate 40 bench points.

The Bears out-rebounded Oral Roberts by a 46-31 margin and turned their 25 offensive caroms into 22 second-chance points. Johnson accounted for 10 offensive rebounds on his own.

Missouri State came out firing on all cylinders to take a double-figure lead less than seven minutes into the game. An 11-0 run over a four-minute stretch early in the opening half saw five different Bears in the scoring column during the run, including a dunk by Obediah Church.  Back-to-back 3-pointers by Austin Ruder and Dixon midway through the half ended a 7-2 stretch by the Golden Eagles and helped the home side secure its biggest lead of the half at 25-13.  Just before the intermission, the Golden Eagles used a 3-pointer by Bradley, a layup by Martin and a shot off the glass from Emmanuel Nzekwesi to get within 42-40 at the break.

Missouri State, which improved to 5-1 at JQH Arena this season, continues its four-game home stand on Saturday for a 5 p.m. tip against in-state rival Southeast Missouri State (4-6) in the opening round of the Continental Tire Las Vegas Classic. 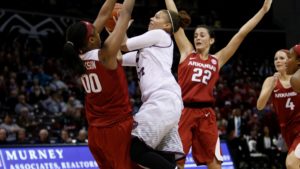 Missouri State’s Lexi Hughes hit a shot with 1.4 seconds remaining to give the Lady Bears a 64-62 victory and hand Arkansas (9-1) their first loss of the season, Sunday at JQH Arena.

Hughes finished with 12 points, Liza Fruendt had a season-high 23 points, including five 3-pointers, Aubrey Buckley scored a career-high 14 points and Rachel Swartz grabbed a career-high 10 rebounds as MSU opened up a six-game home stand with its second consecutive win against the Razorbacks.

The Lady Bears return to action Saturday at 2 p.m. against North Texas (3-6).

The Missouri State volleyball team earned an at-large bid to the school’s ninth NCAA Tournament in the last 14 seasons and 12th overall on Sunday, capitalizing on a 26-8 overall record and Missouri Valley Conference regular season championship to continue a memorable 2016 campaign. The Bears will begin tournament play against Ohio State on Friday, Dec. 2, at 5 p.m. in Manhattan, Kan., in a rematch of a Sept. 9 contest won by the Bears in Hammons Student Center.

The other half of the four-team regional pits No. 14 national seed Kansas State against Lipscomb. The winners will play on Dec. 3 at 7 p.m., and the champion of the four-team sub-regional advances to the third and fourth rounds Dec. 9-10 at a site to be determined.

The Bears own five top-50 RPI victories while accumulating their highest win total since 2006, and recently rode a 17-match winning streak into Saturday’s MVC Tournament championship match, which resulted in MSU’s first loss since Sept. 26. Missouri State boasts the MVC Player of the Year in Lily Johnson, the Freshman of the Year in Daniele Messa, and the Coach of the Year in Melissa Stokes. Johnson, Messa and Simone House earned first-team all-MVC honors, and Lynsey Wright is a second-team all-MVC selection.