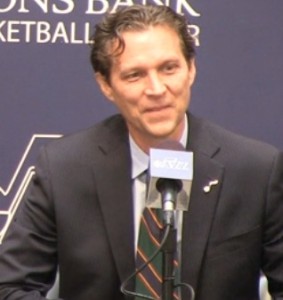 The Utah Jazz named Quin Snyder as head coach. The former Missouri Tigers basketball coach is the eighth head coach in Jazz history and the fifth since the franchise’s relocation to Utah in 1979.  Snyder has been trying to rebound after his career and personal life derailed which led to Snyder leaving Missouri.  Now, after paying his dues, he deserves a second chance at a high profile coaching job.

As I was recovering from a Friday surgery, I wasn’t sure if the pain medicine I was on was causing me to hallucinate or what…When I felt better, and had my wits about me…I realized the story was true…Quin is a head coach again.

From 2007-10, Snyder served as head coach of the Austin Toros of the NBA Development League (the D-League affiliate of the San Antonio Spurs), where he recorded a 94-56 (.627) mark, while leading the club to playoff appearances in all three seasons and advancing to at least the D-League Semifinals each year. In his first season with the Toros, Snyder inherited a team that had finished the prior season 21-29, and led them to a 30-20 record, a Southwest Division title and an appearance in the 2008 D-League Finals. He followed that with consecutive 32-18 campaigns and first-round playoff wins, earning the D-League’s 2009 Dennis Johnson Coach of the Year honors and a selection as head coach of the 2009 D-League All-Star Game in Phoenix. During his three-year tenure in Austin, Snyder compiled more wins and guided more players to the NBA than any other coach in the D-League.

His first head coaching position came at the University of Missouri, where in seven seasons (1999-2006), he led the Tigers to a 128-96 (.571) record and four NCAA Tournaments, including an Elite Eight appearance in 2002. 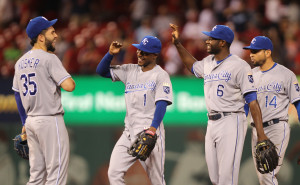 Are the Royals really that bad of a franchise? Things may be turning around. (photo/Bill Greenblatt)

I saw an article from answers.com, (now I can’t find the link) but you have to trust me that it does exist.  It was their list of the top ten worst pro sports franchises.  Some of these I agree with, but there are other teams that should have been added to the list.

So, here’s the list…do you agree of disagree?  I’ll break down the list, but I think they missed out on a couple of Cleveland franchises that should be here. 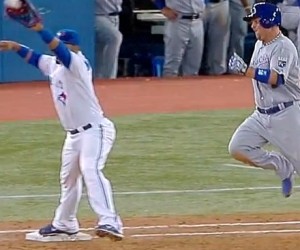 It’s a play right out of Little League.  9-year old Johnny hits a ball to right field, but because the right fielder is playing just past the dirt, the ball hits him in the leg, or stomach, or some other body part, because a coach usually sticks the worst player in right field.  The ball plops down right in front of him.  It’s a short throw to first and Johnny gets nailed by a step.   A fairly common play in sandlots all over the country.

But when it happens in the Major Leagues, it’s a bit embarrassing.  While it does happen it’s rare, but last night Royals DH Billy Butler was the victim as he was thrown out at first base on a ball hit to right field.  Now before you start laughing or making fun of Billy, check out my video as I point out some observations to prove it was just bad luck. 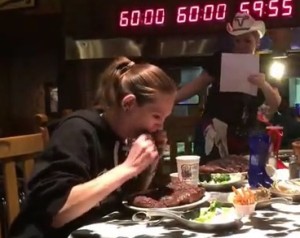 Can Molly Schuyler finish two 72-ounce in an hour? You bet.

Back in January, I featured Molly Schuyler, a professional eater who ate a 72-ounce steak in just about three minutes.  Well, she’s been featured on the news recently after going to a restaurant in Amarillo, TX and eating two, 72-ounce steaks with all the fixin’s which includes a salad, a roll, a baked potato and let’s throw in some shrimp cocktail just for fun.  Molly had one hour to eat both meals or she’d be on the line for the bill.

It wasn’t a question of if she could finish the steaks and fixin’s…the only question would be how long.  I’m pretty sure you’ll be amazed.

Here’s my original video on Molly 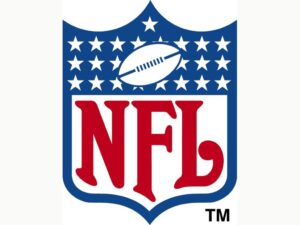 How many of us will be able to attend a Super Bowl in person?  Not many.  So it’s not a big deal for me that Minneapolis was awarded the 2018 Super Bowl, or LII.  (Can we just do away with Roman numerals?)  Anyway, the game will be played inside a new state of the art stadium, I’m not opposed to cold weather cities hosting the big game, even if it means the high rollers who come in to party have to freeze their butts off roaming from one party to the next.

What I am opposed to is expanding the NFL playoffs to 14 teams.  All that means is we get another 9-7 or 8-8 team in the playoffs and while wild card teams certainly have the ability to win the Super Bowl, there needs to be a reward for the teams that have good regular season records and having a 13-3 team play a .500 team in the first round of the playoffs, and potentially need four wins to become champion is absurd.

However, the NFL wants to make more money, and if adding another round of playoffs gets that accomplished, we the fans are stuck with another useless round of games that will be billed as top caliber playoff competition. 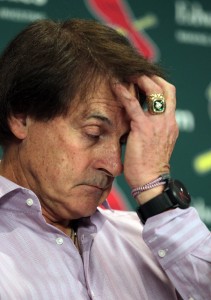 Former Cardinals manager Tony LaRussa has been named Chief Baseball Officer for the Arizona Diamondbacks. The 69 year old will be in charge of overseeing long-term planning, payroll strategy, scouting, the draft and player development.  How will a lifer on the baseball field perform from the executive suites upstairs?

Michael Sam splits from Oprah and will focus on football.  I knew it was a bad idea having cameras follow him around.

A young kid pulls off a pretty good prank with just a slight of hand and leaves a female baseball fan looking foolish. 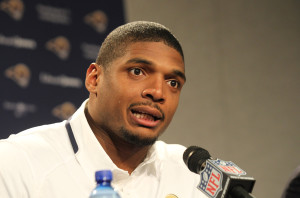 St. Louis Rams rookie Michael Sam talks with reporters at Rams Park in Earth City, Missouri on May 13, 2014. Sam, the first openly gay player was drafted by the Rams in the 2014 draft. UPI/Bill Greenblatt

The Oprah Winfrey Network plans to produce a documentary series following the life of Michael Sam. Cameras will follow Sam as he tries to earn a spot with the St. Louis Rams. Sam said it would be great if his story can lead others to accept who they are and go for their dreams.

Sam is absolutely right, but I have one problem with this. Michael Sam,  you were drafted to be a football player. You pointed much of your blame, about the attention paid to you being gay, on by the media, but now you take the biggest icon in media and use her company to follow your path to the NFL? I’m sorry, you can’t have it both ways.

Now, does Michael Sam really want to be an NFL football player. Yes, I believe so. But, I wonder if his agent or “his people” are looking out for his best interest…do they believe he can really make it in the NFL?  Are they setting up these deals so Sam makes money in his 15 minutes of fame?  I’m interested to know the thought process that went behind this decision, because right now Sam should have one focus. That’s learning and training as hard as he can to make the St. Louis Rams.

Watch my video, hear out my view points, and you’ll also listen again to some of Sam’s comments, then please share your thoughts with me below. 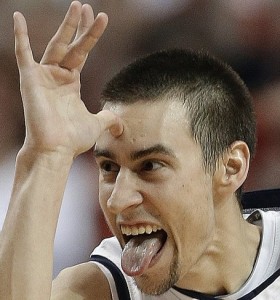 I find the way people reacti to Michael Sam’s draft status and subsequent kiss with his boyfriend,  with the video that aired on ESPN’s SportsCenter, fascinating.  The topic opens up debate and discussion about free speech, what’s right and wrong (which obviously is different from person to person), and I enjoy hearing people make their arguments for whatever side of the fence they are on about this subject.

Then you get a nimrod like former Ole Miss basketball player Marshall Henderson who takes to Twitter to blast the coverage of Sam and then tries to back track by saying he was tweeting as an experiment for a college paper his buddy was working for a psychology class, who get this…happens to be gay.  Like by adding that other detail to your imaginary friend makes this all the more ironic.

Now look, I don’t have proof this classmate or friend exists, so I shouldn’t be bashing Henderson, I should take him for his word right?

Before you dig your hole any deeper Marshall, do one thing for us…produce the friend.  Confirm your tweeting was done for a paper.  Watch my video and I’ll explain more.  Plus, to get caught up on the latest Twitter trail from Henderson, check on the story from FoxSports.com

The Webster University Gorloks got their name from a student contest.

The Gorloks open the SLIAC Tournament on May 8, at Glik Park in Highland, IL. Webster, the #1 seed, faces Fontbonne University at 5:00 p.m.

They set a program record with 37 wins last year and are 264-99 under coach Bill Kurlich who is in his eighth season with the Gorloks.

Let’s learn more about the Gorloks. What are they? How did they get their name and what famous person designed their first mascot costume? Watch our video to find out. 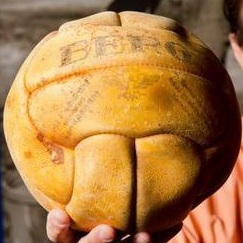 Blair Kerkhoff of the Kansas City Star had a story on the basketball used in the first gold game of the Olympics back in 1936. The ball was smuggled out of Nazi Germany by a Canadian basketball player and now his son wants to sell it.  On my Missourinet Mornings video, I share some  interesting facts about the game and how it was played back then, plus I found one video of a basketball practice at the 1936 games.

The only information I was unable to find is when the auction will take place?  The organizer thinks the ball could fetch six figures.  You’d have to be a basketball nut to spend that much, but if the auction doesn’t work out, the ball is going back to Canada.