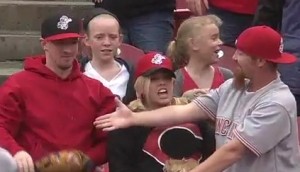 Cincinnati fans react after Matt Adams has a foul ball encounter with the fan on the left.

Matt Adams can say what he wants, but the video shows it in plain sight. He gave a Reds fan a little shove. It wasn’t anything that was going to injure the fan…his safety and well being was never in jeopardy. Adams made a great hustle play going over the tarp and reaching into the first row to get a foul ball off the bat of Chris Heisey. A Reds’ fan got his glove up higher than Adams and was able to snag the foul ball.  The count moves to 2-1…move on.

After Thursday’s game, Adams said, “I figured he caught it, because I didn’t feel it come into mine. I was just trying to stop from falling in there.”

That’s not what the video shows. Instead, I see Adams pull back his glove and push it into the chest of the fan, knocking him backwards into his seat. I get it, Adams is PO’d. The fan robbed him of a great catch, but the fan had every right. So, if you’re frustrated Adams, slam your glove on the tarp, kick the dirt, whatever…but don’t touch a fan out of frustration. The Reds fan responded by heckling and giving Adams “the Bird…” and I don’t mean Fredbird.

Also, to end on a funny note…if you haven’t seen the pictures, one more reason to laugh at the Cubs…on so many levels.  Check it out below. 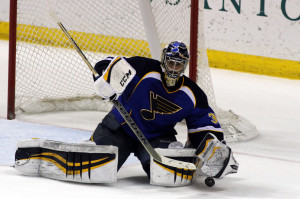 From the team’s viewpoint, giving number one goaltender Ryan Miller the night off against the worst team in the league is the right move, because the St. Louis Blues will have big division games coming up this week against Colorado and Chicago.

It would have been fun to see Miller face his former team, where he spent the first 15 years of his career, but on a personal note for Miller, he would have been a mental wreck. Following Wednesday’s practice, Miller looked emotional when talking about meeting up with his former friends. 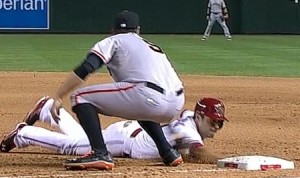 Am I the only one who knows what is the correct call?

A simple pick off attempt at first base. Bang-bang play, but it comes at a non-critical time in the ball game. Yet, the Giants feel it’s worthy of another look on replay, but somehow the umpires in the MLB offices in New York wasted an additional four minutes by not being able to use common sense to over turn a call.

I’m going to show you a video replay of the Giants-Diamonbacks game the other night to illustrate a point as to why the instant replay system in baseball is a work in progress, but needs to be revamped right away.

Because, if they’re going to make non-calls like this…then there is no reason for having the system in place. 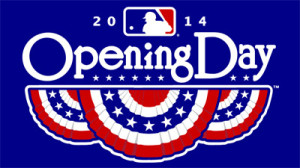 The 2014 season starts for the Royals at 12:05 our time from Detroit. Tigers favored to win the AL Central. Royals poised to make a playoff run. A new leadoff hitter. Nori Aoki in right field. New number two hitter Omar Infante at 2nd base. James Shields will face Justin Verlander, the former Rookie of the Year, Cy Young and MVP will start his seventh consecutive opener for Detroit despite the fact Max Scherzer is coming off a Cy Young season of his own in 2013. Verlander is 16-5 in 29 career starts against the Royals. James Shields makes his second opening-day start for Kansas City. Firmly established as an ace and a workhorse, Shields has topped 30 starts and 200 innings seven years in a row.

Then at 3:05 our time, the Cardinals make another push for the World Series, opening in Cincinnati. Veteran 2nd baseman Mark Ellis will start the season on the DL, with tendonitis. Pete Kozma takes his spot on the roster. Adam Wainwright will get the ball to start against Johnny Cueto of the Reds. Wainwright goes for career win 100 today against the Reds. A team he has had mixed results with. Just 5-9 lifetime and 4-4 in Great American Ballpark. He’ll face Johnny Cueto, who makes his fourth opening day start with news Reds manager Bryan Price, the former pitching coach.

The SEC may not be a strong basketball conference from top to bottom, but at the end of the day, the conference landed two teams in the Final Four. Florida ended Dayton’s fairy tale run with a 62-52 win. Kentucky knocks off Michigan 75-72.

Last but not least, In cooperation with the community of Warrensburg, the University of Central Missouri will hold a welcome home pep rally and parade on Monday, March 31, honoring the 2014 NCAA-II Men’s Basketball National Champion Mules Basketball team.

Members of the campus community and the Greater Warrensburg Area Chamber of Commerce and Visitors Center and UCM Athletics have planned a parade that will begin at 5:30 p.m. on Monday, March 31 at the corner of Holden and Ming Streets in Warrensburg, just south of where Holden Street is closed. The parade will travel south on Holden Street, turn right on Houx Street, and then head to the Multipurpose Building after turning right on Washington Street. A pep rally coordinated by UCM Athletics will follow at 6 p.m. in the Multipurpose Building.

Conference wins tough to come by for Cal Tech.

26 seems to be the magic number when it comes to professional losing streaks. Tampa Bay of the NFL lost 26 games over two seasons. The 1889 Louisville Colonels lost 26 for the longest slump in professional baseball and now the Sixers have tied the Cleveland Cavaliers with 26 losses.  Then as I was searching around, I stumbled across Division III’s Cal Tech Beavers. Since 1961, they’ve only won eight conference games. 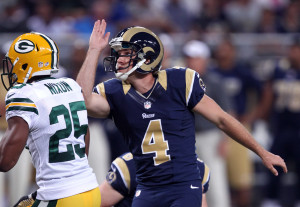 For the first two preseason games, the NFL will experiment and have teams line up at the 20-yard line to attempt an extra point. It will turn out to be a 37-38 yard field goal instead of a 20 yarder. The NFL will see how it goes and make a decision from there. Last season, kickers missed just five of 1,267 extra-point attempts, a conversion rate of 99.6 percent.

Looking at stats compiled by ESPN.com, most kickers are very successful from 30-39 yards. I don’t think we’ll see many problems during the preseason. Field conditions will be at their best. Weather should be great and kickers will be kicking from the middle of the field. 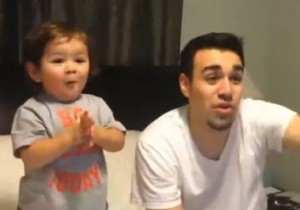 One truly shining moment between a father and son.

Time to meet one-year old Wesley Sandoval. His dad, Dustin, is a big basketball fan and he shares a great father-son bonding moment as they share in the excitement of March Madness. He mimics his dad’s actions and ooh’s at the shots during a second round game between San Diego State and New Mexico State.  What an awesome video! 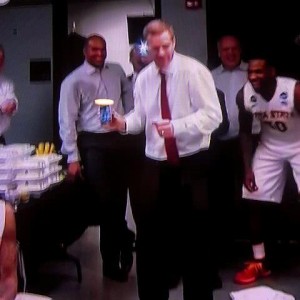 Fred Hoiberg. Dance moves so fast, the camera can keep up.

I’m back after taking a few days off from my Missourinet Morning videos. The last couple of weeks have truly been maddening when it comes to our basketball coverage on Missourinet.com. Each day I wanted to make sure we gave enough front page space to all of our colleges across the state who were in various national tournaments. I was quickly counting up the schools from NAIA, D-III, D-II and D-I and came up with 20 programs that were in postseason play. After this weekend, just three have hopes of a national title.

I saw an article on ESPN.com from Dallas Mavericks owner Mark Cuban who feels the NFL is setting itself up for “an implosion,” if they continue their trend of being greedy. I agree the NFL needs to be careful.

Back to the NCAA Tournament, who wouldn’t want this guy as their head coach. All business on the court, but knows how to have fun, and then apologizes to his daughter. 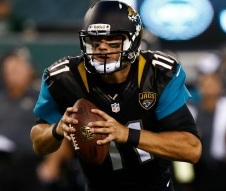 Blaine Gabbert gets a fresh start with S.F.

Before the 2011 draft, 49ers head coach Jim Harbaugh flew into Columbia to personally watch Mizzou’s Pro Day workouts. We all thought the former NFL quarterback was coming in to get a close personal look at Blaine Gabbert. When the 49ers pick came up at number seven, they took Aldon Smith. Gabbert went at #10 to Jacksonville. Today, Gabbert is a 49er.

The teams made a trade after Gabbert’s run with the Jaguars didn’t work out.

I’ve just never been impressed with Gabbert and not all of it is his fault. Let’s be realistic, he was on a crap team for three seasons, but I never bought into his hype. 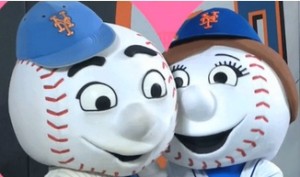 Who would want to break up a couple like Mr. and Mrs. Met? That SLUGGERR is a PLAYERRR. (photo via twitter @MrMet)

Who cares that James Shield pitched into the fifth inning of yesterday’s 8-2 win over the Mariners? Or the fact that Alex Gordon drove in two more runs to bring his spring total to seven? No, we’re all about digging up the dirt on the the dirtiest mascot in all of baseball…Kansas City’s Sluggerrr.

First, there were the stripper pictures. You’ve seen them or you know where to find them. Actually, it was shooting a hot dog at that poor defenseless fan who injured his eye when he couldn’t get his hands up in time to catch the fling’d frankfurter. Then the bachelor party episode, now this.

Mr. Met has been the Mets’ mascot since 1962, while his other half, Mrs. Met, was reintroduced in 2013 after a brief stint with the team in 1975. It seems she’s caught the eye of Sluggerrr, the Royals’ mascot.  He tweeted out to Mr. Met asking why Mrs. Met hasn’t “responded to me yet.”  Mr. Met  replied, “She purr-furs a real man.”