You are here: Home / Sports / Hey, I’m ready to man up and take my punishment for missing out on my World Cup prediction (VIDEO) 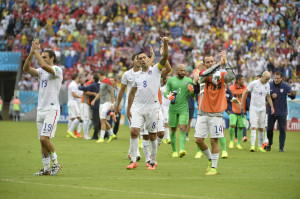 The U.S. men’s national team will advance in the World Cup (photo/ussoccer.com)

I shot my mouth off on Thursday saying there was no way the outcome between the USA and Germany in the third pool game of the World Cup would end up any differently than a tie.  Yet, Germany won 1-0 and we still advance to the knockout round.  With a tie, it was guaranteed both the Americans and Germans would advance, but I didn’t study up the goal differentials.

In soccer terms, it would have been near impossible for the U.S. to not advance unless they got blown out or there was a blow out in the Portugal-Ghana match up.

But…I predicted a tie and didn’t get it.  Now you can watch as I get what I deserve.