You are here: Home / Archives for Eric Greitens

Republican Governor Eric Greitens has called a special session to ask lawmakers to consider blocking a St. Louis ordinance that bans employers from penalizing or firing women who have had an abortion, are pregnant out of marriage or use contraceptives. Pro-choice advocates say not supporting the ordinance is like supporting discrimination. Greitens tells Missourinet that he disagrees. 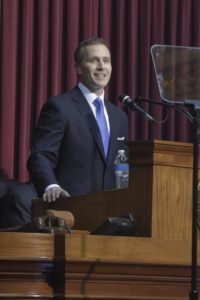 Greitens says his call aims to protect pregnancy care centers, which he says help women and their newborn kids receive quality clothing, food and access to free prenatal care, with employment and their utility bills. He says the ordinance makes it more difficult for the centers to operate.

“They (ordinance supporters) wanted, for example, to make it illegal for pregnancy care centers to say that they just wanted to hire pro-life people,” says Greitens.

Critics say the governor is wasting valuable tax dollars by calling a special session to get his own agenda items passed. Greitens says abortion issues he wants the Missouri Legislature to pass rise to the level of a special session because of a recent federal court ruling that struck down abortion clinic regulations. He says he wants common sense health and safety standards at such clinics.

Greitens wants lawmakers to require annual clinic inspections and a fix that Greitens says would stop abortion providers from interfering with emergency responses when women are experiencing abortion complications.

“What I think Governor Greitens appears to be doing is making up solutions in search of a problem that doesn’t exist,” says Mead.

The governor also wants to require providers to report complications that women have from abortions.

“Court after court, informed by major medical associations who are responsible for doctors and nurses and healthcare providers maximizing people’s health across this country and in this state, have repeatedly proven that these politically-motivated restrictions that interfere with access to abortion and healthcare are dangerous to women’s health,” says Mead. “That’s what people need to know. At the center of this issue that’s being very politicized are people and their health outcome.”

In campaign-style fashion, Greitens will hold pro-life rallies on Friday in the Republican strongholds of Joplin, Springfield and St. Charles before Monday’s start of the special session. A high profile name will be alongside him at the Joplin and Springfield rallies. Former Arkansas Governor and Republican Presidential candidate Mike Huckabee will be there to support Greitens’ cause.

Governor Greitens (R) says Missouri’s budget is being drained by special interest tax credits and the faster-than-projected growth in healthcare spending, partially from Obamacare. Greitens is withholding more than $146 million in the current state budget.

“I’m protecting our priorities, like K-12 education and public safety. For instance, not a single penny will be coming out of K-12 classrooms,” says Greitens. “The fact is, more hard choices lie ahead. But as Missourians, I believe we must come together, tighten our belts, be smart and wise with our tax dollars, and work our way out of this hole by bringing more jobs with higher pay to the people of Missouri

“Our districts where we have seen some improvement, and if dollars are going to have to be diverted to make up that shortfall, that could hamper our districts continuing on the course of improvement,” says Beatty. “If they’ve got to cut from transportation, that money has got to be made up somewhere because we have to the kids to school. So, it’s going to ultimately have to impact the classrooms.” 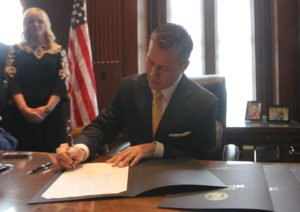 Other budget withholdings from the Department of Elementary and Secondary Education include $2 million in performance-based assessments, $181,000 for scholars and fine arts academies, $50,000 for training grants and $44,500 for a new dyslexia training program.

Beatty argues that $90 million of the governor’s $146 million in budget restrictions are in education spending – mostly higher education.

Beatty agrees with Greitens that Missouri has given too many special interests tax breaks. As a result, she says vital services have been cut.

Missouri’s four-year colleges and universities will by far receive the biggest blow of Republican Governor Eric Greitens’ $146.4 million in additional spending restrictions announced Monday. About $56 million will be slashed from core funding for four-year institutions. Missouri’s community colleges are next in line with nearly $12 million in core funding restrictions. The Department of Elementary and Secondary Education’s transportation budget will be hit with $8.6 million in withholds. 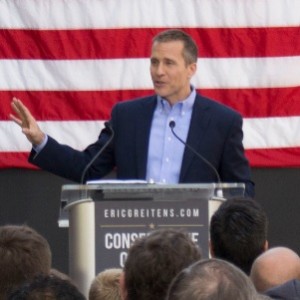 In a social media video accompanying the announcement, Greitens says “Not a single penny will be taken out of K-12 classrooms.”

“The restrictions announced include no cuts to the Foundation Formula that funds K-12 classroom education. There were no cuts to programs essential to public safety, and all of the state’s pension and health care obligations will also be honored. The restrictions were targeted, to the extent possible, at rolling back earmarks, new spending items, programs with no established track record of success, and services that are duplicated elsewhere in government,” says Greitens.

In a statement from Greitens, he says Missouri’s budget is suffering from reduced revenue due to poor economic growth. He says that revenue is being drained by special interest tax credits and the faster-than-projected growth in healthcare expenditures, driven in part by the national impact of Obamacare.

Gotta “budget is unbalanced and they’ve been raising your taxes for yrs” arg when supermaj repubs have written budget and tax law for yrs https://t.co/6rVxiU4CRj

Greitens says during the next 18 months, more than $700 million in budget cuts will be necessary just to make the budget balance and retain Missouri’s AAA credit rating.

Additional details on the spending restrictions are linked here.

Governor Greitens will hold Tuesday his first State of the State address. The speech is traditionally when the Governor releases the state budget proposal, but Greitens plans to wait until February to unveil his budget requests.