You are here: Home / Archives for Super Bowl parade

UPDATE: The state Department of Transportation (MoDOT) says westbound I-70 on the Rocheport bridge in mid-Missouri has re-opened, after being closed for almost six hours. MoDOT’s Central District is warning that overnight refreezing is likely on bridges and elevated roadways. The agency will be bringing in additional crews, during the overnight hours. Motorists are urged to slow down.

HERE IS THE ORIGINAL STORY:

State transportation officials say westbound I-70 is completely closed at the heavily-traveled Rocheport bridge in mid-Missouri, due to numerous snow-related crashes. Multiple tractor trailers are involved in the crash, which happened at about 12:15 p.m. 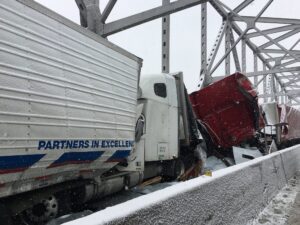 State Department of Transportation (MoDOT) spokesman Adam Pulley tells Missourinet they hope to re-open westbound I-70 by 4 p.m. this (Wednesday) afternoon. Tow trucks have arrived in a tight area on the bridge.

Missouri state troopers say there’s one injury, and that there is a lot of debris from the crashes.

“People who are leaving the parade heading towards the south or to the east, be aware that you are going to be moving into more hazardous conditions than you think you are,” Barham says.

Missourinet’s Ashley Byrd reports visibility, at times, was only a quarter-of-a-mile today in Columbia. The Jefferson City/Columbia areas are expected to see about five inches of snow. The NWS Springfield office says Joplin and the Stockton Lake areas could see up to six inches.

The NWS is also warning about deteriorating conditions in the St. Louis region, with a snow/sleet mix.