You are here: Home / Archives for Missouri Levee and Drainage District Association

Levels on the Missouri River could move into minor flood stage from Nebraska City to northwest Missouri’s St. Joseph this week. Chairman Tom Waters with the Missouri Levee and Drainage District Association says the area isn’t prepared for a high-than-normal runoff predicted. 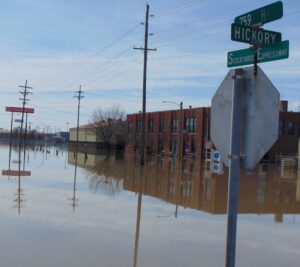 The Missouri River spread out into St. Joseph in 2019/Photo by Brent Martin

“The big issue for us is soil moisture,” Waters tells Missourinet affiliate KFEQ in St. Joseph. “Normally, North and South Dakota, Montana through the summer and fall, it dries out and you go into winter dry, the soil moisture is dry and then it snows, you have your spring rains, but when the soil thaws it’s hungry and it soaks up a lot of that water. There’s not any of that water that is going to be soaked up this year. So, any snow, any rainfall we have we know today that that is going to run into the river and cause river levels to be higher.”

That makes members of the Missouri Levee and Drainage District Association nervous, according to Waters.

“Membership’s very anxious about what’s going on here,” Waters says. “We’ve seen people that had their 2018 crop in a bin that was flooded and lost, weren’t able to plant a 2019 crop and now going into 2020. If they don’t get this crop in, they may be out of business.”

Waters says the only good that could come out of the widespread damage from last year’s floods is that it could finally change attitudes about how best to manage the Missouri River.

Waters perceives a shift in attitudes after the 2019 floods which wasn’t the case after either the 1993 or the 2011 floods.

“Everybody realizes we have to do something different,” according to Waters. “We went through this in 2011. We went through it in 1993 and we didn’t do a lot different. I think we’re seeing some signs and hints it’s going to be different this time so that maybe five or ten years down the road we won’t have such a problem.”

Another wrinkle has been added. The US Army Corps of Engineers is on standby to help in whatever way it can in the battle against the coronavirus. At present, the Corps doesn’t believe that will hamper continuing efforts to rebuild the levees damaged by last year’s floods. Levees in the Omaha District of the Corps of Engineers have mostly been repaired. Several levees in the Kansas City District remain damaged, making vast areas of northwest Missouri and northeast Kansas vulnerable to flooding.