You are here: Home / Archives for Ed Emery 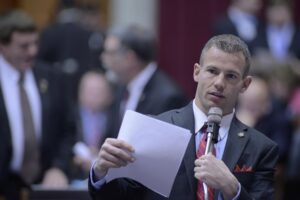 Former State Representative Rick Brattin of Harrisonville has taken 49% of the vote compared to State Representative Jack Bondon’s 44% in the race for the Missouri Senate District 31 seat. Brattin and Bondon, both Republicans, have been campaigning to replace outgoing GOP Senator Ed Emery of Lamar.

Term limits prevent Emery from running for re-election for the overwhelmingly Republican district. The district extends from western Missouri down to southwest Missouri.

Bondon was backed by two powerful state organizations – the Missouri Farm Bureau and the Missouri Chamber of Commerce and Industry.

Brattin, the current Cass County Auditor, faces Democrat Raymond Kinney of Raymore in November. He served eight years in the Missouri House, from 2011 to 2018.

The state Chamber says Missouri needs to offer more digital learning opportunities to its K-12 students. It released a study last week that makes that case.

For the state to move in that direction would require changes in policy, funding appropriations and improvements in the state’s broadband infrastructure.

Senator Ed Emery (R-Lamar) says none of those things are reasons to delay.

Emery has proposed again this year legislation that would allow students to enroll in charter schools or school districts in which they do not live to take online courses. He says that fits right into the findings of the study, and Chamber spokespeople noted his bill in presenting those results.

“A discussion of the advantages that specific families or students had received from being able to access virtual schools, whether it was a course or whether it was because it was a lack of an ability to sit in a bricks-and-mortar building.”

Emery says online learning could be a greater benefit to students than traditional classrooms.

“It really does begin to tailor the education process to the individual student probably more effectively and simply than anything else we can do. It’s a whole lot easier to transport data than it is to transport students.”

He says development of digital learning would also spur developments in the areas needed to support it.

“As we get better at this and as we learn the value of it and begin to see that demonstrated, that is a new incentive, or at least a renewed incentive, to expand the infrastructure.”

The Missouri Chamber of Commerce Education Foundation has released a report that it says shows Missouri must offer more digital learning options to K-12 students if it wants to be one of the top 10 states for education by 2020. 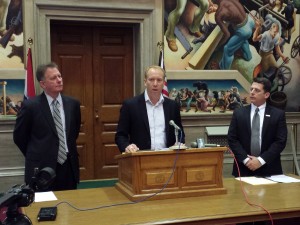 The study was conducted by Colorado-based Evergreen Education Group. CEO John Watson says one of its key findings is that Missouri needs to offer a statewide, publicly-funded online school.

“There are some districts across Missouri that are offering these types of options for students,” says Watson, “but we remain in a time where those options are not available to all students across all of Missouri. In 2014, these options simply should be available. There’s no reason students across the state can’t have access to a full range of online and blended learning options.”

Watson acknowledges that Missouri, like other states, would have to make improvements to its broadband infrastructure, but he says that’s no reason to wait on efforts to expand online education opportunities.

“Our view,” Watson says, “is that we don’t want to wait for broadband to be available everywhere to start putting some resources into these new types of programs. It really has to be a parallel effort where we’re creating new opportunities for students and the state is creating the infrastructure so that students across the state can access them.”

Watson says his group has found that increased investment in and focus on digital public education can be cost-neutral to a state.

Legislation being offered by Senator Ed Emery (R-Lamar) and that will be offered by Representative Kathy Swan (R-Cape Girardeau) will address online learning options.

Legislative attempts to set in state statute how school districts should define and deal with bullying have come and gone for another session without a bill being passed. 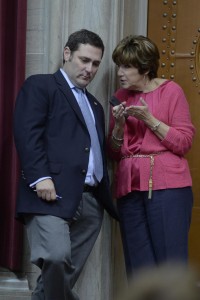 Representative Mike Colona (left) talks to Representative Sue Allen (right), whom he praises for her work on the bullying issue, saying it is a real issue for her and not politics. (photo courtesy; Tim Bommel, Missouri House Communications)

The key dividing issue remains whether to allow schools to enumerate, or to list groups of individuals that are protected from bullying based on things like sexual orientation, race or religion. Several versions of the bill would preserve current statute that disallows such lists of protected classes.

Democrats maintain that such lists are necessary to deal with issues that vary from district to district across the state. Republicans say enumeration would give preference to certain groups and argue that current statutes protects all students equally.

Representative Mike Colona (D-St. Louis City) says in the final days of the session there was agreement reached between the two sides on letting local school districts decide whether to enumerate. He says that would be a good compromise.

reason some of her fellow House Republicans were willing to vote for a bill that would let local school districts choose whether to enumerate was because they expected enumeration to be rejected in the Senate.

“I think the fact that we passed it in the House may be a bit deceptive.”

Senator Ed Emery (R-Lamar) confirms there is still division in the Senate, saying he will block any bill that allows enumeration.

“The identification of special groups by local school districts is not allowed is the language that is currently in statute and I am in favor of leaving that language in statute.”

Senator Jolie Justus (D-Kansas City) on the other hand says she will block any bullying bill that does not allow enumeration. She says leaving that up to local control is the right approach.

“I think it makes no sense to pass a state law that says a specific school district can address a specific issue, and it’s not just a gay and lesbian issue. It’s the disability issue, it’s poverty. It’s all sorts of different things.”

Allen says in days after the session ended she was ready to give up on the issue, calling it a “lose-lose” situation. Now she says she’s contemplating a different approach in 2014.

“Maybe next year, just look at the definition of bullying and cyberbullying and make it short and sweet, and not make it as all-encompassing as what we had, but try to come up with a way that everybody is going to see what is really important here. In my opinion it’s a safer school environment for all kids.”

Allen says if she can pass a simpler bill in 2014, she might try for the broader legislation if she is back in the legislature in the 2015-16 term.