You are here: Home / Business / Missouri River closed to shipping from St. Louis to Kansas City

Flooding has closed traffic indefinitely along the Missouri River from Kansas City to St. Louis – putting a big kink in the plans of businesses shipping products down the waterway. During a conference call Monday, Jud Kneuvean with the Kansas City District of the Army Corps of Engineers says the U.S. Coast Guard shut down barge and boat traffic there on Sunday. 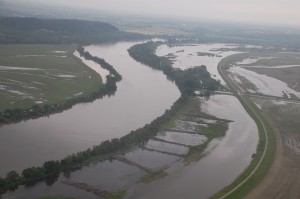 Flooding along the Missouri River in northwest Missouri

“It’s closed to all traffic, including recreational traffic,” he says.

The river is closed from river mile marker 0 to 380, according to Kneuvean.

He says some exemptions could be granted through a waiver.

The stretch of river will reopen when conditions improve.

More rainfall is expected in flood-hammered Missouri over the next few days and could cause additional problems with the state’s roads, bridges, waterways, land and structures.

As of Monday, Kneuvean says 43 levees have been broken or overtopped in Missouri. Two of the levees were intentionally breached to prevent further damage. Missouri has more than 300 levees, federal, non-federal and otherwise.