You are here: Home / Business / Missouri’s August right-to-work ballot measure is a referendum, which is rare (AUDIO)

For the first time in more than 36 years, Missourians will be casting ballots on what’s known as a referendum. 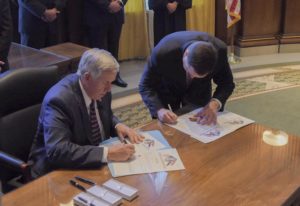 The right-to-work referendum will appear on your August 7th statewide ballot.

A referendum involves a bill approved by the Missouri Legislature, which in this case is a 2017 right-to-work bill.

Secretary of State Jay Ashcroft (R) notes only two referendums have been approved in Missouri history.

“Commonly when bills, laws are put before the people and they have the opportunity to decide whether or not they’ll pass or fail, 24 out of 26 times they’ve failed,” Ashcroft says.

The last referendum happened in April 1982, regarding a law permitting large trucks on state highways.

Then-Governor Eric Greitens (R) signed a right-to-work bill in February 2017, but labor unions and their supporters were able to collect enough signatures to get the issue on the statewide ballot.

“And because they collected those signatures, the people of the state will decide whether it (right-to-work) goes into effect, not the Legislature and the governor,” says Ashcroft. 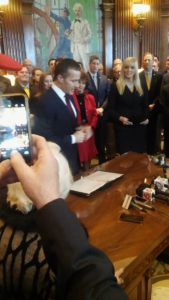 Ashcroft notes a referendum involves an issue referred to the people.

The August right-to-work referendum is on the 2017 bill approved by the Missouri Legislature.

Ashcroft tells Missourinet a “yes” vote supports the right-to-work bill, and a “no” vote opposes the bill.

This is only the fourth referendum in Missouri since 1969.

The Missouri Legislature approved separate bills calling for a higher state income tax and higher pensions for state employees in 1970.

The only two bills approved by Missourians in referendums involved prohibition enforcement in 1920 and a 1926 workmen’s compensation bill.

Right-to-work supporters like State Rep. Holly Rehder, R-Sikeston, say it would increase both union and non-union jobs in Missouri.

About 60% of Missourians rejected a right-to-work ballot measure in 1978.

Click here to listen to the full interview between Missourinet’s Brian Hauswirth and Missouri Secretary of State Jay Ashcroft, which was recorded on July 23, 2018: