President Donald Trump visited the St. Louis area on Wednesday to drum up support for a proposed GOP tax overhaul. Trump delivered his remarks to about a thousand supporters at the St. Charles Convention Center. The president laid out his selling points for the plan, which he says would benefit the middle class and ultimately “bring Main Street rolling back.” 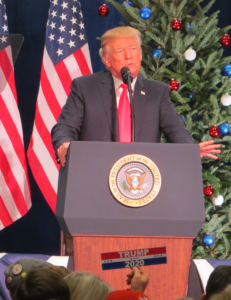 “Under our plan, middle class families will not only see their tax bill go down, they will see their incomes go up by an average of around $4,000 and that’s because we’re going to cut taxes on American businesses so they will compete for workers and they will raises salaries,” Trump said. “It is not enough for the middle class to keep getting by. We want them to start getting way ahead.”

The president’s visit comes as the U.S. Senate considers a Republican tax plan that includes dropping the corporate tax rate from 35% to 20%, doubling the standard tax deduction and minimizing the number of tax brackets. The chamber could vote on the legislation tomorrow.

The Missouri Democratic Party paints a different picture of this massive tax overhaul. Chairman Stephen Webber referred to the president’s talk as a “GOP tax scam.”

Webber released the following statement on behalf of the Missouri Democratic Party:

“Higher taxes on millions of middle-class Missourians. More expensive healthcare. Less money in the pockets of seniors throughout the entire state. That’s exactly how Donald Trump’s tax scam rips off working families in Missouri while also giving away handouts to billionaires and millionaires,” said Webber.

At one point, Trump deviated from the tax reform bill to show his support for Attorney General Josh Hawley, R, in his run for the U.S. Senate. In doing so, Trump took a shot at Hawley’s Democratic rival, U.S. Senator Claire McCaskill.

Trump jokingly added, “Other than that, I think she’s doing a fantastic job.”

A statement from McCaskill says the GOP legislation would further complicate the tax code, keep open loopholes, deepen the national debt and give most of the benefits to the wealthy. During a recent U.S. Senate committee meeting, she said the Senate’s version calls for $300 billion in cuts to Medicaid and subsidies for people who make less than $50,000 a year.

Displayed behind and around Trump was an American Flag, along with decorated Christmas trees and banners that read “Merry Christmas.” The President used this to conclude his speech, “Together we will give the American people a big, beautiful Christmas present.”

Meanwhile, hundreds of demonstrators were gathered outside of the St. Charles Convention Center to protest the president’s visit.

Lisa Adams of St. Charles was among those voicing disapproval toward the president and the tax plan.

“This tax reform is only good for the very, very upper and not for the majority of the people in the United States. This president is a liar, cheater, and thief,” Adams said.

Trump supporters also gathered outside of the convention center. This resulted in a heated exchange of words at times between the two sides.

Jackie Pirone was among those supporters.

“He’s doing everything for this country we’ve needed for a long time. It’s time to take back the power of the people. I just think we need to show a united front for him,” said Pirone.

This is Trump’s second visit to Missouri since August to rally support for sweeping changes to the nation’s tax laws. He kicked off his tax campaign in Springfield.