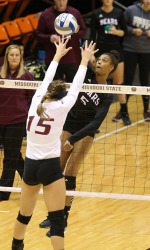 Missouri State earned a spot in the Missouri Valley Conference championship match on Friday evening with a 25-22, 25-19, 25-20 victory over second-seeded Southern Illinois (23-9) at Hammons Student Center.

Now winners of nine consecutive matches, the Bears (24-9) will square off with top-seeded Wichita State (25-8) at 4 p.m. Saturday in pursuit of the school’s fifth conference volleyball tournament title.

MSU sophomore Lynsey Wright blasted 15 kills on 20 swings with one error to hit .700 in the contest, and Lily Johnson added 16 kills as the Bears hit .276 as a team and limited the Salukis to a .147 attack efficiency.

The Bears came back from a 17-15 deficit to win the first set, going on a key 8-1 run to take control at 23-18. SIU countered with two blocks to pull to 23-21, but Simone House answered with a block of her own before Lauren Boone’s kill secured the win.

Johnson served two aces during an opening 6-0 run in the second set, and a kill by Ashley Ophoven made it 10-2 in favor of the Bears. The Salukis chipped away to a 15-14 deficit, Wright and Ophoven answered to make it 18-15, and Johnson kills accounted for MSU’s final six points to pull away from a 19-17 score.

The Bears used a 5-0 run to lead 13-6 in the third set and never looked back. MSU led by at least five points until an SIU block made it 23-19, but Wright had the response with kills for Missouri State’s final two points.

MSU owned the final advantage in kills (50-38) and digs (63-58), while matching the league’s top blocking team with eight stuffs each. House matched a season high with seven blocks, Tatum Marshall lifted a season-best 15 digs, and Kinsey Batten handed out 45 assists.