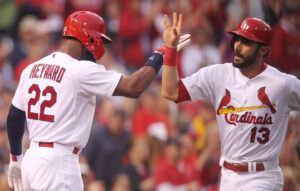 Adam Wainwright gave up a pair of two-out singles in the eighth inning of a tie game to draw a visit from his manager.

Mike Matheny stuck with his ace, even after he walked the next batter.

They were rewarded with a win.

Wainwright pitched out of the bases-loaded jam and Kolten Wong hit a go-ahead sacrifice fly in the bottom of the eighth, lifting the St. Louis Cardinals to a 2-1 win on Sunday night for a three-game sweep of the Cincinnati Reds.

Cincinnati starter Mike Leake was just as good as Wainwright, if not better, but gave up a leadoff double on a 90 mph sinker to Jon Jay in the eighth — just the Cardinals’ fourth hit of the game.

Jay moved up on Yadier Molina’s slow groundout to third base and scored easily on Wong’s fly out to deep left field, breaking a tie that lasted most of the game.

Jordan Walden then pitched around a leadoff single by Brennan Boesch in the top of the ninth, stranding him at second base to record his first save of the season.

Wainwright (2-1) retired 12 batters in a row at one point and gave up seven hits, one run and two walks while throwing 67 of his 102 pitches for strikes.

“He was good right from the beginning,” said Matheny. “It was just a very, very good outing.”

Leake (0-1) had a string of 15 consecutive outs and threw just 86 pitches in his eight innings, including 66 for strikes. He gave up four hits and no walks while striking out three.

“You’re not going to score runs every day,” said Leake. “Gotta keep games close. Unfortunately it was a 2-1 game.”

The pitchers’ duel moved the game along at a brisk pace.

It finished in just 2 hours and 2 minutes.

The Cardinals, who have won five in a row overall, moved to 5-1 against the Reds this season.

Boesch and Joey Votto had two hits apiece for the Reds, who have dropped four in a row and seven of their last eight since beating St. Louis in the opener of a three-game series on April 10.

Matt Carpenter hit his second homer of the season on Leake’s 2-1 fastball leading off the bottom of the first inning.

Votto singled for the second consecutive at-bat with two outs in the third inning, went to second on Todd Frazier’s walk and scored on Brandon Phillips’ single to tie the score at 1-1.

Leake retired 15 in a row before Carpenter stroked his second hit of the game, a one-out single in the sixth inning.

Wainwright retired 12 in a row before Tucker Barnhart’s two-out single in the seventh.