The St. Louis Rams’ woes continue as the bad luck they experienced in their first two games, on the road, follows them to the Edward Jones Dome as they lose their home opener 36-17 to the Green Bay Packers in front of 60,234 fans – many wearing the colors of the Packers plastic cheeseheads, and cheering loudly for the visitors. 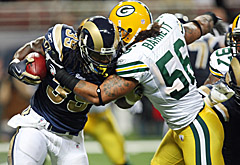 The Rams had a chance early as they got the ball on the opening kickoff and put themselves into field goal range. But a 48 yard field goal attempt by Josh Brown was blocked by Green Bay’s Johnny Jolly and the Packers took over.

The Pack took advantage of the opportunity to move the ball into field goal range and struck on a 48 yard attempt by Mason Crosby to put Green Bay on top 3-0 with 6:03 to go in the 1st quarter.

Green Bay scored a second field goal, taking advantage of a Marc Bulger fumble at the St. Louis 15 yard line. Mason Crosby drilled through a 38 yard field goal to put the Pack in the lead 6-0.

Bulger injured his right shoulder on the play and tried to continue but could not and was replaced with backup quarterback Kyle Boller, who completed 16 of 31 pass attempts for 164 yards and a pair of touchdowns. Boller also rushed for 31 yards. The extent of Bulger’s injury won’t be known until an MRI can be taken.

Crosby wasn’t done with place kicking duties as he drilled a third field goal in the 1st quarter, a 25 yarder, on the final play of the period to put the Packers up 9-0. The Packers got the ball on the St. Louis 12, courtesy of a Steven Jackson fumble.

In the 2nd quarter John Kuhn scored the Packers’ first touchdown of the afternoon as he ran it in from a yard out to cap a 6 play, 80 yard drive. Crosby’s extra point made it Green Bat 16, St. Louis 0.

The Rams came back on their next series of downs to put up their first points of the day. Kyle Boller tossed a 16 yard pass to Daniel Fells in the end zone to put the final touches on a 10 play, 78 yard drive. Josh Brown’s extra point was good and the Rams has narrowed the lead to 16-7.

The Rams weren’t done for the half as Fells caught his second touchdown pass of the game, a 19 yard pass from Boller to cap a 9 play, 84 yard drive with under 2 minutes to play in the half. Packers 23, Rams 14.

The Rams cut the lead to 23-17 as Josh Brown launched a 53 yard field goal through the uprights with just under 8 and a half minutes to go in the 3rd quarter. The 3rd quarter ended with the Pack leading 23-10.

With a little more than 12 minutes to go in the 4th quarter the Packers picked up some insurance as quarterback Aaron Rodgers ran from 4 yards out for the TD. The extra point was no good and Green Bay had a 29-17 lead. 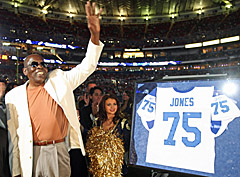 Green Bay put more points on the board with just under 5 minutes to play as John Kuhn caught a 10 yard touchdown pass from Rodgers. The Crosby extra point was good and the Pack led 36-17.

The Rams head to the West Coast, next weekend, to play the 49ers in San Francisco.

This was a special day for the Rams franchise. Prior to the game the Rams honored the man known as the Secretary of Defense as they retired uniform number 75 worn by David "Deacon" Jones during his career from 1961-1971 with the Los Angeles Rams.