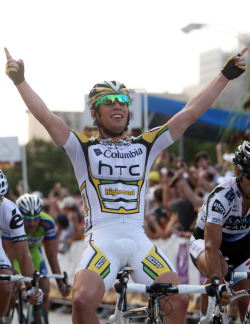 British sprinter Mark Cavendish (Columbia-HTC) thrilled the huge Labor Day crowds with a sprint victory at Stage One of the Tour of Missouri which got underway in St. Louis. He held off Juan Jose Haedo (Saxo Bank) of Argentina, who finished second, and Thor Hushovd (Cervelo Test Team) of Norway, who finished third, for the first Missouri Tourism Leader’s Jersey of the week.

A field of 118 professional riders representing 23 countries started the 75-mile (120.7-kilometer) course rode under sunny skies, which radiated off the famous Gateway Arch just beyond the start/finish area along Market and 7th streets in downtown St. Louis. The circuit race, 10 laps of 7.5-miles each, also passed other St. Louis landmarks, including the Anheuser-Busch InBev Brewery, Busch Stadium and Lafayette Park. It was a stage that was predicted to be ruled by the top sprinters, and three of the best ended the day on the podium.

In addition to the Missouri Tourism Leader’s jersey, Cavendish also captures the Edward Jones Sprint jersey as well as leads in the points classification for the 180 Energy/Icelandic Glacial Water Best Young Rider jersey. His Sprint jersey will be worn by in Stage 2 by Aldape, who was second in the sprint points. The Most Aggressive Rider jersey will then be worn tomorrow by Vaitkus.  (photo courtesy of Bill Greenblatt, UPI)

The group will leave St. Louis and make their way toward St. Genevieve.  Recap courtesy of TourofMissouri.com .