It’s been a very interesting congressional August recess for Senator Claire McCaskill (D-MO) as she tours the state to get feedback from Missourians on issues of great importance. And there is no doubt the health care reform debate is the top concern of many Show-Me State residents. 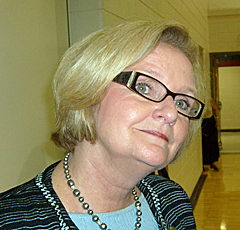 McCaskill has held eight town hall forums focused on health care reform and is quick to admit she has not changed many hearts and minds.

“That’s not really the point,” said McCaskill while speaking to reporters following last Wednesday’s town hall in Jefferson City. “The point is this is my job. I work for the people of this state, whether they agree with me or disagree with me and I have an obligation to get out and listen to them and try to answer questions.”

The town halls have become rather rowdy and noisy at times. McCaskill says that while she would prefer things to be more orderly, she understands the concerns expressed by people and respects their right to speak.

“We have this great big giant healthy First Amendment in this country,” said McCaskill. “I feel for the people who come that want to listen, that can’t, when people start screaming out and it is bad manners.”

And she does not believe the shouting will change anyone’s views.

“I don’t think it’s particularly persuasive,” explained McCaskill. “Being the loudest doesn’t make you right and it generally doesn’t work very well in terms of convincing other people. But they have a right to do it and I respect their right to do it.”

McCaskill volunteers she has learned quite a bit during these forums, particularly from health care providers and how hospitals deal with the mix of insured and uninsured patients.

The final two health care forums are scheduled for Monday in West Plains and Springfield.