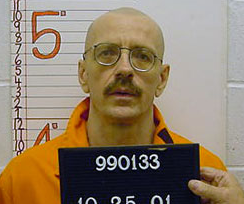 The attention has suddenly shifted from the execution of Reginald Clemons, 37, who was scheduled to be put to death at 12:01 a.m. tomorrow, to that of an admitted neo-Nazi, 59-year-old Joseph Franklin.

Clemons’ execution was halted earlier this month when the U.S. Court of Appeals for the 8th Circuit granted an "indefinite stay of execution" for the Missouri death row inmate accused of participating in the murder of two sisters, Julie and Robin Kerry, at the old Chain of Rocks Bridge in St. Louis. Visit Missourinet’s Death Row Web page for more background on the case.

However, execution news did emerge from Attorney General Chris Koster’s office today as he seeks an execution date for Franklin, a death row inmate convicted of race-related killings in Missouri and other states.

Koster today is asking the Missouri Supreme Court to set an execution date for the 1997 shooting and killing of Gerald Gordon, who was standing in the parking lot of a St. Louis area synagogue after a bar mitzvah. Franklin was also convicted of shooting two other men who were in the synagogue parking lot.

"Joseph Franklin planned out and committed a heinous crime that was borne of pure hatred, and it is time for him to face his punishment," Koster says.

Franklin would be executed for his crimes in Missouri, but he was also found guilty of murdering two African-Americans in Utah, an interracial couple in Wisconsin, and the bombing of a synagogue in Tennessee. Franklin claims to be responsible for shooting Larry Flynt, publisher of Hustler Magazine.

Franklin carefully scouted synagogues in St. Louis before selecting one in Richmond Heights that had bushes nearby where he could hide and fire on the crowd there, Koster says.

Franklin confessed to the 1977 murder in 1994 while serving six consecutive life sentences a tthe U.S. Penitentiary in Marion, Illinois.

"Anti-Semitism and racism were at the heart of Franklin’s crimes," Koster says. "His kind of hatred cannot be tolerated by socieity. It is time for justice to be served."

"He didn’t care who he killed, he just wanted to kill members of the St. Louis Jewish community," Koster tells the Missourinet. "It was a murder that was clearly rooted in religious hatred."

Despite Franklin’s criminal history and the cold-blooded nature of his crimes, opponents of the death penalty are expected to protest his execution just as any other. Koster says that doesn’t sway his resolve that Franklin’s sentence should be carried out.

"The jury has established the verdict in this matter and the pentalty and that penalty was death," Koster says. "Joseph Franklin’s history of criminal conduct has been so extraordinary, so rooted in racial and religious hatred, and so destructive to the lives of so many families that it merits the penalty of death. I agree with that decision and the time has come to move forward."

He is being held at the Missouri prison at Potosi. The Missourinet’s Death Row Web page has more details on Franklin’s St. Louis crimes.

Just last week, James Von Brunn allegedly tried to open fire at the Holocaust Museum in Washington, D.C. Von Brunn, a white supremicist/activist, grew up in the St. Louis area and attended college at Washington University. The University issued a statement on its stance for celebrating diversity and teaching tolerance.

Franklin has been convicted of the following murders:

Alphonse Manning and Toni Schwenn (Madison, Wis.) – In 1985 Franklin was found guilty of killing interracial couple Alphonse Manning (black) and Toni Schwenn (white), both 23 years old. The couple was reportedly pulling out of a shopping mall when Franklin rammed their car from behind, then got out and shot Manning twice and Schwenn four times, killing both of them. He was sentenced to two life terms.

Bryant Tatum and Nancy Hilton (Chattanooga, Tenn.) - Franklin pleaded guilty to the July 29, 1978 sniper murder of Bryant Tatum (black) and for attempting to murder his white girlfriend, Nancy Hilton. The couple were at a Pizza Hut when Franklin admits to hiding in tall grass near the restaurant and gunning them down. He was sentenced to life.

Donte Brown and Darrel Lane (Cincinnati, Ohio) – Cousins Dante Brown, 13, and Darrel Lane, 14, were walking to a convenience store in 1980, when Franklin, reportedly standing on an overpass, shot two bullets into each child. Lane died at the scene and Brown died a few hours later at the hospital. Franklin was found guilty and sentenced to two life terms.

Ted Fields and David Martin (Salt Lake City, Utah) – Ted Fields, 20, and David Martin, 18, were jogging with two women at Liberty Park. Franklin fired on the group, striking Fields three times and Martin five, killing both. One of the women was injured. He received two life sentences for the crime.

Gerald Gordon (Richmond Heights, Mo.) - On Oct. 8, 1977, Gerald Gordon, Steven Goldman and William Ash walked through a synagogue parking lot. None of them knew Franklin reportedly had a Remington 700 hunting rifle aimed at them. Franklin reportedly fired five shots, killing Gordon and injuring Goldman and Ash. In February, 1997, a jury found him guilty and sentenced to death by lethal injection.

Franklin has also admitted to synagogue bombings as well as other murders and attempted murders, but because it’s believed many of his stories are fabricated, solid evidence is not available.

Chris Koster’s comments on the case