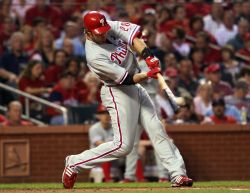 Cardinals’ starter Adam Wainwright just hasn’t been as effective as I remember him in the past.  I think he’s been fortunate to escape some damage and come into last night’s game with a 3-0 record.  However, the World Champs made him pay in the Phillies 10-7 win over the Cardinals.

Wainwright missed on his pitches and gave up seven runs and nine hits and two walks in six innings of work.  He also gave up home runs to Shane Victorino and Jayson Werth who went deep for the second game in a row.

St. Louis showed some power as well getting solo shots from Ryan Ludwick, Yadier Molina, and Albert Pujols who took his ole friend Brad Lidge deep to lead off the ninth.

The Cards were down 4-3 heading into the fifth when Wainwright got into more trouble giving up singles to Jimmy Rollins and Victorino.  Wainwright picked Victorino off first base and got Raul Ibanez to strike out.  Wainwright wanted nothing to do with Ryan Howard pitching around him.  That brought up Werth, who just like a guy like Ryan Ludwick will burn opposing pitchers for going around Pujols, Werth did it to Wainwright taking a 1-1 fastball to left that put the Phillies up 7-4.   From there the Cardinals could never recover.

The World Series Champs take the two games in this series for the Cards’ third loss in a row.  The Cardinals host Pittsburgh tonight with Mitchell Boggs taking on Zach Duke.