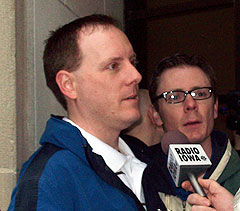 A gay couple from Jefferson City was waiting in line this morning to be among the first to obtain a same-sex marriage license in Iowa. Earlier this month the Iowa Supreme Court issued a ruling which legalized gay marriage and today is the first day licenses are being issued to gay and lesbian couples.

Chris Tabor and Rusty Warning talked with reporters as they waited in line outside the County Recorder’s Office in Iowa’s capitol city. Tabor says says going to Iowa for a marriage license was a natural thing to do: “We’ve been together for nine years and for us, when we heard the news, it was just a matter of planning the arrangement and coming up to Des Moines and getting it taken care of.” Warning told reporters it was an easy decision once they heard about that Iowa Supreme Court Decision. “It was instantaneous,” he said. “…I think most of the question was: Which day can we get off work?”

The marriage license Tabor and Warning got this morning won’t be recognized in Missouri, but Tabor says they don’t care, saying, “It matters to us, that’s really why we are doing it. And we’re glad to see a state in the Midwest do this for us, so we’re really happy about it. ” Both doubt Missouri will allow gay marriages anytime soon and both said they don’t care to lead the fight for gay marriage in their home state. “We’re not going to be on the front of the wagon, trying to make Missouri change. If Missouri allows it, then it will be wonderful for us. But otherwise, we’re o.k. because it means something to us,” Tabor said. Warning added: “I don’t look for Missouri to change. I would look for it to get changed on the federal level before it ever got changed in Missouri and who knows how long that may take.”

A constitutional amendment banning same-sex marriages in Missouri passed with 70 percent of the vote in 2004. Missouri already had a law at that time defining marriage as between one man and one woman. Amendment supporters feared a lawsuit could have overturned the law and felt the anti-gay marriage issue would be on better legal ground as part of the state constitution.

The Iowa Supreme court earlier this month did in that state what anti-gay marriage supporters feared would happen in Missouri. The Court found Iowa’s law banning same-sex marriages was a violation of the state constitution. Iowa is the third state to allow same-sex marriage, the first in the nation’s interior.