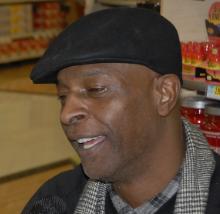 The Kansas City Royals Caravan made three stops in mid-Missouri on Wednesday visiting a school in Warrensburg, and grocery stores in Jefferson City and Columbia.  The Royals are gearing up for Fan Fest this weekend.

Soria had a breakout year in 2008 closing 42 of 45 games with an ERA of 1.60.  Butler hit .275 and finished the season strong hitting .300 in September after being sent down to AAA Omaha in the middle of the season for a little attitude adjustment.

Here is some information on the Royals’ Fan Fest this weekend.  Click below to listen to my conversations with Soria and Butler as they talked about their off-season work out plans and the pressures of living up to high expectations from one player who had great success last year that led to an All-star appearnce to another still learning his way around the big leagues.

Thanks to Brent Martin for his help with Willie Wilson.