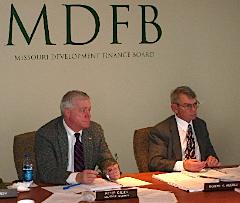 The team and the Sports Complex Authority claim they will use the credits for renovations to the Truman Sports Complex and the surrounding area. Bill Newman, Senior Vice President of Administration for the Chiefs, says a portion of the credits would be sold to come up with $10-million to be applied toward the construction of a $13.45-million indoor events and football training facility on the campus of Missouri Western State University in in St. Joseph. The Chiefs would maintain their training camp in St. Joseph for a minimum of ten years.

Having been approved by the Board, this project does not need legislative approval. It only requires the approval of the Director of Economic Development, the Director of Revenue, and the Commissioner of the Office of Administration.