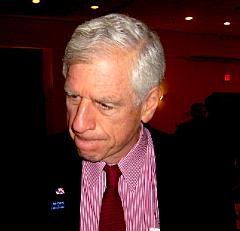 Former U.S. Senator John Danforth (R-MO) sees sexism raising its ugly head during this political campaign, but he believes Republican vice presidential nominee Sarah Palin will hold her own against what he sees as sexist attacks from Democrats.

Danforth, who has appeared at a number of events at the Republican National Conventionin Saint Paul, Minnesota, says criticism that a woman with five children is really in no position to be going after one of the highest offices in the land is blatant sexism, adding no one would say that about a man.

As for the issue of inexperience, Danforth says there is a big difference between going after the top job in the land and the number two spot. Danforth adds that while it’s true Palin is a Governor with no foreign experience – Jimmy Carter, Bill Clinton, and George W. Bush were in that same position at one time and there were relatively few complaints over their lack of foreign experience.

Danforth believes many liberals are attaking and trying to destroy Palin the way they attacked and tried to destroy U.S. Supreme Court Justice Clarence Thomas. Danforth says the Left cannot tolerate a woman or a black straying from liberal orthodoxy.