A former Missouri governor says he’s doing just fine outside the day-to-day world of politics and into the thick of public policy discussions. 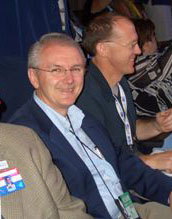 Former Governor Bob Holden established the Holden Public Policy Forum at Webster University in St. Louis where he brings prominent Democrats and Republicans to campus to discuss the important issues facing the United States. Holden says he hopes to improve the level of policy discussions in the country; to turn them from being so partisan and bitter.

Holden spent last week as a Clinton delegate to the Democratic National Convention in Denver. He argued persuasively at a meeting with fellow Clinton delegates that the party must unify behind Barack Obama.

Holden says he uses his platform at Webster, where he also teaches, to encourage young people to become politically active, whether as a Democrat or as a Republican. Holden says he will help a young person no matter what political party he might choose.

Four years ago, Holden lost the Democratic gubernatorial primary to Claire McCaskill who lost the general election to Republican Matt Blunt. Holden says he’s very satisfied where he is, though he won’t rule out politics in the future.