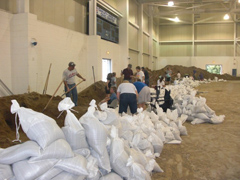 Northeast Missouri remains a battleground:  residents versus the river.

Sandbagging continues all along the Mississippi River, swollen from nearly non-stop rain earlier in Iowa. Residents of Canton, La Grange and Clarksville are erecting temporary sandbag levees furiously, bolstered by help from volunteers, state officials and hundreds of National Guardsmen.

Winfield now has become a focal point. A 150-foot wide gap opened in a levee near Winfield last night. A 40-foot wide breach occurred this afternoon northeast of Winfield.

Efforts now focus on reinforcing Winfield’s secondary level with as many sandbags as possible as water pours toward the river town.

The Army Corps of Engineers in St. Louis reports that 11 agricultural levees between Hannibal and St. Louis have been overtopped by rising river levels. All of the levees are in Missouri, built mainly to protect farm land. Agricultural levees are built lower than those protecting population centers and are more susceptible to floodwaters.