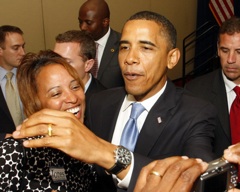 An upbeat Barack Obama meets with the Democrat faithful in St. Louis, one stop of many as Obama attempts to unify a divided party around his candidacy.

Obama has told Democrats gathered in downtown St. Louis he believes there is nothing America can’t accomplish. He says Americans are tried of being divided by politics. He says Americans want a politics that lifts them up, not one that tears them down.

Obama, who now has the number of delegates needed to secure the Democratic nomination for president, is wooing supporters of Hillary Clinton, attempting to switch them over to his side. In the February presidential primary in Missouri, state Democrats split nearly evenly between Obama and Clinton. Obama won big in Missouri’s urban centers. Clinton won the suburban and rural areas.