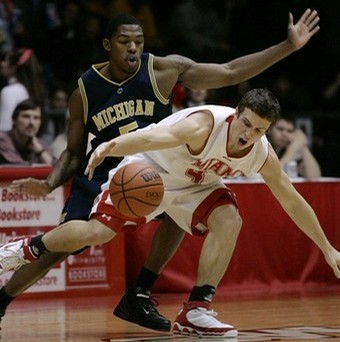 The University of Central Missouri Mules basketball team announced that Division I transfer Alex Moosmann will wear the Cardinal & Black next season. He comes to UCM from the University of Miami (Ohio), where he played the last two seasons. Moosmann played his prep ball at St. Francis Borgia in Washington, Mo.

A two-year starter for the Red Hawks and head coach Charlie Coles… as a freshman there, helped team to the MAC Championship and a berth in the NCAA Tournament before losing to Oregon by two points in the first round… tied the school record with 33 games played in both his freshman and sophomore seasons… led the team in assists and ranked among the MAC leaders in assist-to-turnover ratio as a freshman… he was named the Arthur and Olga Atkins Freshman of the Year after averaging 4.3 points, 3 assists, and 25.6 minutes per game…

Attended St. Francis Borgia High School in Washington, Mo., playing for head coach Dave Neier… led the team to a 30-1 record and a Class 4 Missouri State Championship as a senior while averaging 23.4 points and 4.5 assists per game… earned all-state honors two times and was the St. Louis co-player of the year along with current Mules signee Sanijay Watts… was also the runner-up for Mr. Basketball in Missouri… the Academic All-State Player of the Year, he also played in the MBCA Hall of Fame and Riverwar All-Star Games… averaged 23 points per outing as a junior as well, hitting 62 percent from the field… he was a four-year letterman and three-year captain for the Knights as well… his father, Terry, played golf for the Mules… majoring in marketing and was a member of the National Honor Society.

"We are thrilled to have Alex join our program.  He was a highly decorated player for one of Missouri’s best high school coaches at one of the state’s finest high school programs, as well as a solid contributor at the Division I level.  We feel he will be an outstanding player in the MIAA with his ability to score, make plays, and play defense.  He is an excellent student and individual who we feel will have an immediate impact."