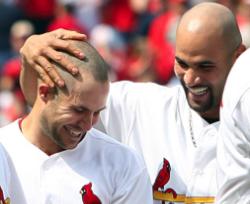 The Cardinals came back from a heartbreak loss earlier this morning by beating the Astros 4-3 in the bottom of the 9th.  There were also some fireworks after Adam Wainwright brushed back Brad Ausmus.

Kaz Matsui homered to lead the game off, but the Cardinals scored three in the third on a two run double by Albert Pujols, and sac fly by Troy Glaus.  The Astros tied the game on two solo home runs by Lance Berkman.

Adam Wainwright went the distance despite giving up the three solo home runs, allowed just five hits, two walks and struck out six.  He was lifted for Cesar Izturis who pinch ran and scored the winning run.

Things got a little testy in the third inning when Wainwright threw behind catcher Brad Ausmus, leading Ausmus to walk out to the mound.  Both benches were warned and everything went back to normal.