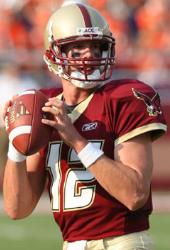 Colleges hold specific days during the winter that are called Pro Days.  They take place after the NFL combine and they are designed to allow seniors who were not invited to the combine to show off their skills in front of NFL scouts.  Chiefs head coach Herm Edwards made a special trip to Boston earlier this week to watch Boston College standout Quarterback Matt Ryan.

The Kansas City Star reported that Edwards said he is just being diligent with Ryan because Ryan didn’t work out at the NFL combine.

While Edwards is saying that he was just there to get a better look, I’m starting to wonder if the Chief’s brain trust came to the conclusion this off season that Brodie Croyle may not be the answer.