State Treasurer Sarah Steelman (R-MO) is running for re-election. The announcement came today in the kitchen of the Jefferson City house in which she grew up – a house her parents still call home. Steelman was flanked by her parents, her husband David, and two of her children as she made the announcement. 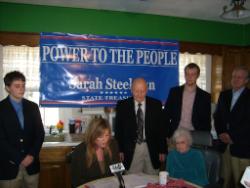 The slogan of the Steelman campaign is, “Power to the People.” Steelman says her idea of putting people first is reflected in many of the actions she has launched as State Treasurer. They include the concept of terror-free investing of state funds, an idea which started in Missouri and is being followed by several states and at the national level. Steelman also takes credit for refining the state college savings plan, which she says is recognized as one of the best in the nation.

The announcement had been shrouded in secrecy, with a media advisory asking the press to, “Please join Missouri State Treasurer Sarah Steelman as she makes an important campaign announcement from the kitchen table of her childhood home.” That advisory had led to speculation Steelman might be ready to announce a challenge to incumbent Governor Matt Blunt (R-MO) in the Republican Party Primary. But that was not to be.

Asked, by reporters, whether she considered running for Governor, Steelman responded, “I know you guys want to ask me that question but, really, the thing is that I am … I enjoy my work in the State Treasurer’s Office.”

Steelman added, “You know, I don’t think people are interested in what I’m gonna do or not gonna do. I think what they want to know is how am I going to help them through the programs that we have, help get their kids to college … or how am I going to help to make sure that Missouri is expanding our economy and our tax base and creating jobs.”

Questioned about some of the problems that might be encountered by Republicans in what many political pundits are calling a Democratic year, Steelman expressed her belief that voters will look at the job she is doing and judge her on it.