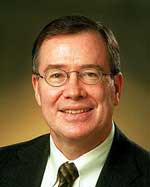 The head of the University of Missouri-Columbia has a special tie to the Virginia Tech shooting spree that left 33 dead. Chancellor Brady Deaton spent 11 years on the faculty of Virginia Tech, from July of 1978 to February of 1989. Deaton says he knew the campus well and his son attended the university.

Deaton says he has sent Virginia Tech President Charles W. Steger letters and emails filled with condolences. But he says he and his wife have tried to avoid causing too many disturbances as the university tries to move on from the incident.  Deaton has offered the services of MU’s psycho-social trauma team and MU Professor Dr. Arshad Hussain, the head of the university’s psycho-social trauma center.

The Chancellor says a tragedy similar to what happened in Blacksburg, VA could happen anywhere and could become a reality in Columbia. Deaton says MU simulated an exercise yesterday with a gunman on Lowry Mall. He says the exercise had been scheduled in January and the date just happened to fall on the day after the Virginia Tech shootings. Deaton says the university is well prepared to face any incident similar to what occurred in Blacksburg and he says the university will continue to review emergency procedures. He adds that MU is working with its counceling services to ensure that the university has the social and psychological resources in place to offer help to students.  Deaton says he wants to ensure MU has a system that aims to take precautionary steps in preventing any situation similar to the Virginia Tech shooting spree.