You are here: Home / Archives for Urban League

Hundreds of protesters have lined streets in Kansas City, Springfield, Columbia, and the St. Louis area this weekend chanting phrases like “Hands up, don’t shoot” and “No justice, no peace”. They have been calling attention to this week’s death of George Floyd, an African-American man in Minneapolis. A white police officer is accused of third-degree murder after pinning Floyd to the ground by pressing his knee into Floyd’s neck for about eight minutes. 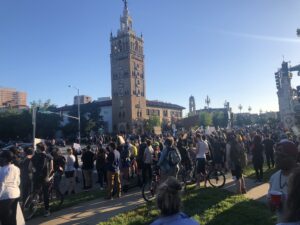 The casualty is stirring up the pain felt when 18-year-old Michael Brown, Jr. was shot to death in 2014 by a Ferguson police officer. Brown, an unarmed African-American man, was killed by Darren Wilson, who is white.

Brown’s death led to protests for days on the streets of Ferguson, looting, and vandalism – some of the same acts happening in Minneapolis, Atlanta, and elsewhere during protests. His death also sparked a movement driven to stop unarmed African-Americans from getting killed by law enforcement.

Kansas City Mayor Quinton Lucas tells KMBC-TV he wants this weekend’s protesters to work for change in the community between African-Americans and police.

“What we are not out here to do is act a fool, is to have generalized hooliganism, is to do something that will, I think, tarnish not just the life of George Floyd but also to tarnish, I think, what is a wonderful peaceful rally,” he says.

Lucas, who is African-American, spoke with passion about bringing people together – not driving them apart.

In Kansas City, some protesters have been arrested and police have used pepper spray on some individuals. On Twitter, the Kansas City Police Department confirmed officers are using tear gas to keep people off of streets.

As tonight’s protests continue; we respect everyone’s right to peacefully gather and protest, we have used CS gas (known as “tear gas”)to encourage people to remain out of the street in compliance with city ordinances. We will continue to ensure a peaceful night for everyone.

In the St. Louis region today, protesters lined the streets in Clayton, University City, and in Ferguson. Some demonstrators blocked traffic on Interstate 70.

Another angle of the March through University City: pic.twitter.com/KZ2VTa3Gcj

“If George Floyd would have been white, would he have died on the street like an animal begging for mercy while he struggled to breathe,” asks Clay. “The three officers who stood by and did absolutely nothing to save his life must be charged as accessories to murder.”

After Brown’s death, Clay helped to create a consent decree between the City of Ferguson and the U.S. Department of Justice to help change policing practices.

Here are scenes from earlier today in southwest Missouri’s Springfield:

A few more photos from today’s protest in #SGFmo against police brutality and the death of #GeorgeFloyd pic.twitter.com/VSoXqIVFSh

In response to the protests, Gov. Mike Parson has declared a state of emergency. He has signed an executive order giving the Missouri Adjutant General or his designee the power to activate National Guard soldiers if necessary. In a press release, Parson says the Missouri National Guard and the Missouri Highway Patrol stand ready to support local authorities.

“We are deeply saddened by the tragic death of George Floyd. We are also saddened by the acts of violence that have transpired across our nation and state in response to this event. At this time, we are taking a proactive approach to protect Missouri and its people,” the governor says. “Citizens have the right to peacefully assemble and protest, and the State of Missouri is committed to protecting the lawful exercise of these rights.”

Parson says despite the many peaceful assemblies, other events have created conditions of distress and hazards to the safety, welfare, and property of residents and visitors that are beyond the capacities of local authorities.