You are here: Home / Archives for U.S. Rep. Vicky Hartzler

A man from southwest Missouri’s Nevada hopes to become the first independent elected to Congress from Missouri since 1996. 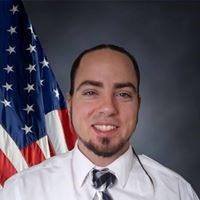 35-year-old Robert Smith of Nevada plans to run for Congress as an independent in 2020 (photo courtesy of Mr. Smith)

Robert Smith says he will run as an independent in 2020 against U.S. Rep. Vicky Hartzler, R-Harrisonville, in the sprawling fourth district. He says the two major parties have a duopoly which disenfranchises voters.

“I feel that whenever you’re elected as a Republican or a Democrat, you have to hold party lines, you owe favors,” Smith says.

He says preserving Social Security is one of his top priorities, along with reducing the national debt. He also wants to see increased livable wages. Smith, who worries Social Security will be insolvent by 2035, supports legalizing marijuana and hemp to provide funding for Social Security.

“I believe with the cannabis and the hemp, hemp can open up new industries,” says Smith. “We can make paper, you can make biodegradable plastics which can start fighting pollution.”

Hartzler, who was elected to Congress in 2010, is expected to seek a sixth House term next year. The district includes Columbia, Sedalia, Warrensburg, Lebanon and Moberly. It includes Fort Leonard Wood and Whiteman Air Force Base near Knob Noster.

Missouri hasn’t elected an independent to Congress since 1996, when Cape Girardeau’s Jo Ann Emerson won. Her husband, then-Congressman Bill Emerson (R), died in June 1996, and because of state law at the time, she had to run as an independent. That’s because the filing deadline for the election had already closed. While she ran in 1996 as an independent, Emerson had the backing of Missouri GOP leaders at the time. After being elected, Emerson was a Republican.

As for Smith, he knows that it’s been 23 years since an independent was elected to Congress from Missouri. He’s pledging to impose term limits on himself.

“As a U.S. House of Representatives member I will not seek more than three terms, which would be six years,” Smith says.

He also says he would reject medical benefits and the congressional retirement package, if elected.

Click here to listen to Brian Hauswirth’s full interview with Robert Smith of Nevada, which was recorded in July 2019:

A west-central Missouri congresswoman is praising an $81 million federal grant to replace the aging I-70 Rocheport bridge, saying it’s a prime example of communities and tax dollars working together to address a critical need. 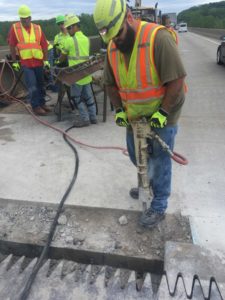 “This bridge is a corridor that connects the east and the west coasts of this country and certainly it connects St. Louis and Kansas City, population five million,” Hartzler says.

The Missouri Farm Bureau, the state’s largest general farm organization, says the federal grant is critical, saying the I-70 corridor is “badly in need of repair.” Hartzler, who serves on the House Agriculture Committee, tells Missourinet more than 12 million vehicles cross the bridge annually, including three million trucks.

“And that equals to about 100 million tons of freight, which equals more than $154 billion annually so many trucks,” says Hartzler.

Rocheport is just west of Columbia. Farm Bureau President Blake Hurst says I-70 is critical to shipping Missouri’s agricultural goods to buyers across the world.

The current bridge is 59 years old, and the state Department of Transportation (MoDOT) says it’s in poor condition.

As for Congresswoman Hartzler, she emphasizes that the successful effort to land the grant was a bipartisan effort. Hartzler says U.S. Reps. Lacy Clay, D-St. Louis, and Emanuel Cleaver, D-Kansas City, signed her letter backing the project.

“We stood up together as a Missouri (congressional) delegation and said this is important not only just for the fourth district but for the entire state of Missouri,” Hartzler says.

The grant will allow the existing bridge to be used during construction of the new six-lane bridge, avoiding projected three to eight-hour backups under a bridge rehabilitation.

While MoDOT will have to provide additional funding for the project, Missouri Senate President Pro Tem Dave Schatz, R-Sullivan, tells Missourinet the state “will come up with the funds.”

Click here to listen to Brian Hauswirth’s full interview with U.S. Rep. Vicky Hartzler, R-Harrisonville, which was recorded on July 22, 2019:

The state Department of Transportation (MoDOT) has received an $81 million federal grant to replace the aging I-70 bridge in mid-Missouri’s Rocheport, a bridge that carries millions of vehicles annually. 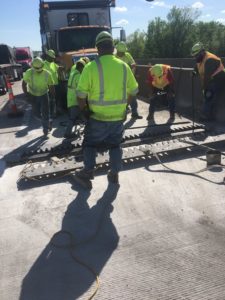 Parson says the funding will allow the existing bridge to be used during construction of the new bridge. Senate President Pro Tem Dave Schatz, R-Sullivan, tells Missourinet motorists would have faced three to eight-hour backups without the grant, under a bridge rehabilitation.

“When you put the commerce that goes across I-70 basically in those types of traffic jams, you know seven, eight-hour traffic jams, the reality of what that really costs at the end of the day is astronomical,” Schatz says.

“Within 48 hours, there are trucks that are traveling across that bridge that are ending up somewhere within the lower 48 states in the United States,” says Schatz.

The successful effort to land the $81 million grant has the strong, bipartisan support of Missouri’s congressional delegation. Hartzler tells Missourinet that U.S. Reps. Lacy Clay, D-St. Louis, and Emanuel Cleaver, D-Kansas City, signed her letter in support of the project.

“I think Senator Blunt, Senator (Josh) Hawley, going to bat for Missouri obviously making the case for how critical this is to our state, not only to our state but to the economy in general across the whole country,” Schatz says.

Governor Parson says the grant will allow the $240 million project to build a new six-lane I-70 Rocheport bridge near the current one, as well as reconstructing the nearby Route BB interchange. The governor expects construction of the new bridge to begin in 2021.

The grant will also mean $301 million in state bonding that is expected to repair or replace another 215 bridges across the state. Schatz sponsored that provision in the Senate.

COLUMBIA, Mo.- A Missouri congresswoman whose sprawling district includes Fort Leonard Wood and Whiteman Air Force Base in Knob Noster traveled to Columbia on Monday to raise awareness about PTSD and veteran suicides. 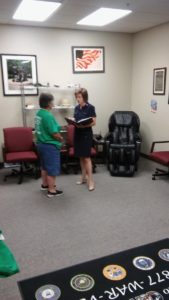 “They’ve served us and when they come back they deserve us to step up and to stand by them and to help them,” Hartzler says.

Hartzler describes the situation as heartbreaking.

“Each one of these individuals is not a statistic. They’re a husband, they’re a father, they’re a son, a daughter,” says Hartzler.

Congresswoman Hartzler, who serves on the House Armed Services Committee on Capitol Hill, says the Veterans Administration (VA) has not spent money appropriated last year by the Congress for veteran suicide prevention.

“We found out that money was not spent and in Congress, we are trying to focus on and make sure people are aware of this,” Hartzler says. “So it was very disheartening and actually angering.”

Hartzler met with veterans and their families during Monday’s tour. She praises the work being done at the Columbia Vet Center, including trauma counseling and transitional assistance. The facility, which works closely with the Harry Truman VA Medical Center in Columbia, also assists veterans who suffered sexual trauma while serving our country.

The Columbia Vet Center says it employs preventive intervention strategies to enhance the quality of life for veterans.

The facility says it “provides access to veterans in a setting that is stress-free”, adding that 86 percent of staff members are veterans.

Click here to listen to U.S. Rep. Vicky Hartzler, R-Harrisonville, brief Brian Hauswirth and other mid-Missouri reporters on July 1, 2019 at the Columbia Vet Center on Rangeline:

The economic development director in west-central Missouri’s Sedalia says a $400 million steel rebar manufacturing plant under construction there is one of the largest projects Missouri has landed in the past decade. 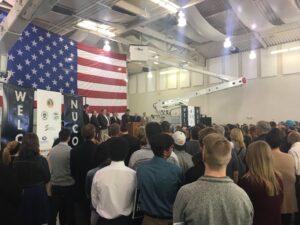 Executives from Charlotte-based Nucor made the plant announcement at the Missouri State Fairgrounds on November 21, 2017 (file photo courtesy of State Sen. Denny Hoskins)

Sedalia-Pettis County Economic Development Executive Director Jessica Craig says the decision by North Carolina-based Nucor is a game changer for Sedalia, which has about 70 manufacturers.

Craig says the 500 construction workers include men and women from various trades.

“From electricians to welders to fabricators to equipment installers and those individuals that are doing dirt work and site prep,” says Craig.

The plant is expected to open in November.

Craig tells Missourinet that Nucor has hired about 150 employees so far, to fill three shifts. She says Nucor is still hiring, and the steelworker jobs will pay an average salary of $65,000.

“It (steel plant) has inspired a lot of development, additional development in the community. There are retail and commercial locations also under construction in that corridor,” Craig says.

While Sedalia’s population is about 24,000, Craig says they draw workers from a ten-county labor base with a population of 256,000.

Sedalia Mayor John Kehde spoke to Missourinet Sedalia affiliate KDRO (AM 1490) last week, praising the project and saying it’s good for the community. Mayor Kehde is also pleased with the progress that’s been made.

The United States Department of Agriculture (USDA) has announced that it’s selected the greater Kansas City area for the relocation of two major facilities: its Economic Research Service and the National Institute of Food and Agricultural Policy. 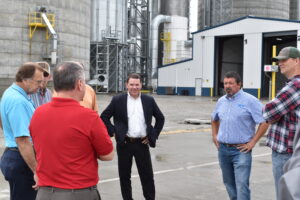 U.S. Rep. Sam Graves, R-Tarkio, who represents 36 northern Missouri counties, says it makes sense to move the USDA agencies from Washington to what he describes as “the heart of farm country.”

“This is going to take those agencies right out to the very places that they’re doing research for and trying to help and the industry they’re trying to help,” Graves says.

Missouri Governor Mike Parson (R) says the Kansas City area is closer to USDA’s farmer-constituent base. Congressman Graves, who farms in northwest Missouri, agrees. He says the move gets USDA closer to the people they serve.

“And what’s more, it gets them closer to FAPRI, the Food and Agricultural Policy Research Institute there at the University of Missouri which does a lot of the work, the research work for these two agencies,” says Graves.

FAPRI was started in 1984. Its website notes it provides objective analysis of markets and policies. One of its primary purposes is to provide decision makers with information about how policy changes or market conditions impact the agricultural sector.

While there will be efforts to block it, Graves is optimistic about USDA’s proposal to relocate to the Kansas City region. He says it underscores the quality of life in the greater Kansas City area.

Missouri Farm Bureau President Blake Hurst agrees, saying Kansas City “is the heart of our farm economy” and is the right choice for USDA.

Cleaver expects a fight from the Maryland and Virginia congressional delegations.

Congressman Graves says the move will save tax dollars. The “Kansas City Star” reports Agriculture Secretary Sonny Perdue says the relocation will save USDA about $300 million over 15 years.

Graves tells Missourinet the U.S. General Services Administration (GSA) will conduct a search for a site, emphasizing that nothing has been decided yet on the site.

Graves also emphasizes that it’s been a bipartisan effort in Missouri to land the jobs, crediting both Congressman Cleaver and U.S. Rep. Vicky Hartzler, R-Harrisonville.

Click here to listen to Brian Hauswirth’s full interview with U.S. Rep. Sam Graves, R-Tarkio, which was recorded on June 13, 2019: