More than 100 bridges in Missouri’s $350 million bridge bonding plan are now under contract, and 13 have already been completed. 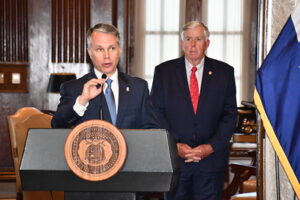 “Before the fiscal year is concluded (on June 30), we’ve already got 114 of those (bridge projects) under contract. Our team and our consulting partners have been working very hard,” McKenna says.

A heavily-traveled bridge on Highway 79 in eastern Missouri’s Lincoln County will open to the public on Friday afternoon. During the media briefing, Director McKenna told Missourinet that the 82-year-old bridge in Lincoln County has been replaced, using funding from the 2019 bridge bonding plan.

“It’s replacing a bridge that was built in 1938, and that will be upgraded to current standards. It’s going to be eight feet wider and 20 feet longer,” says McKenna.

Lincoln County, which is north of St. Charles County, has been one of the fastest-growing counties in the state.

McKenna says 13 bridges have already been completed, so the Lincoln County bridge will be the 14th.

In 2019, Missouri lawmakers approved the $350 million bridge bonding plan, which is repairing or replacing 250 deteriorating bridges. The plan was a top priority for both Governor Mike Parson (R) and Senate President Pro Tem Dave Schatz (R-Sullivan).

He also notes that the Missouri Highways and Transportation Commission has authorized more than $1 billion in construction awards this year.

McKenna joined the governor at this afternoon’s media briefing. Earlier in the day, McKenna testified before a legislative committee about the COVID-19 pandemic’s impact on MoDOT.

McKenna testified before the bipartisan Joint Committee on Transportation Oversight, telling lawmakers that the pandemic has had a $45 to $100 million impact on his agency.