You are here: Home / Archives for mental illness

A Missouri lawmaker whose son committed suicide in March is urging his House colleagues to increase funding for mental illness, saying it’s an underfunded and hidden issue. 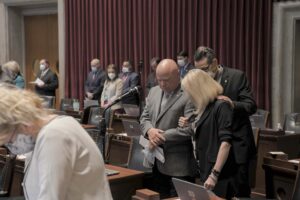 “We don’t know what to do with a mentally ill person because we can’t see the problem, like we see a broken leg,” Kidd says. “A broken brain though is no different than a broken leg.”

Kidd says his 34-year-old son, who lived in Kansas, had battled depression and schizophrenia.

“When you are broken mentally, we don’t know what to do because treating mental illness again is an art, not a science. Each person’s brain chemistry is unique,” says Kidd.

Kidd says he and his wife Jamie worked with their son’s case and social workers in Kansas, and attended National Association of Mental Illness classes.

Kidd is urging the Legislature to appropriate more funding for mental health services. He says social workers are underpaid and have overwhelming caseloads.

After Representative Kidd’s floor speech, the Missouri House observed a moment of silence for Taylor.

Click here to listen to the Missouri House floor speech from State Rep. Bill Kidd, R-Buckner, which was delivered on April 27, 2020 in Jefferson City: