You are here: Home / Archives for Maryland Heights 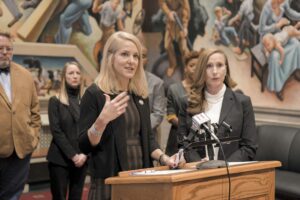 During a Statehouse press conference about opioid issues and HIV legislation, Rehder told Missourinet there’s a renewed interest from Senate leadership in getting it off the table early in the 2020 session. She references Senate President Pro Tem Dave Schatz, R-Sullivan, and Senate Majority Leader Caleb Rowden, R-Columbia.

“They really want to get it through the Senate early,” Rehder says. “And so, however that process is, I fully trust them that that’s going to be on the (Senate) floor early this year.”

The Missouri House approved Rehder’s bill this year by a 103-53 vote, but the bill died in the Senate. It died primarily because of opposition from the Senate Conservative Caucus, which has six GOP members. State Sen. Denny Hoskins, R-Warrensburg, and others in the caucus have privacy concerns with PDMP.

During an interview with Missourinet after Wednesday’s press conference, Rehder dismissed the privacy issues. She also cites the toll the opioid epidemic is taking on Missouri families.

“It just gives our physicians and medical professionals easier access,” says Rehder. “And so I think some of the fear has gone away that it’s some big brother looking at your medications. It’s not, it’s covered by HIPAA.”

HIPAA stands for the federal Health Portability and Accountability Act.

The National Council on Alcoholism and Drug Abuse says nearly three people a day died of opioid overdoses in St. Louis in 2018. Rehder says the opioid epidemic is impacting the entire state.

Meantime, firefighters in the St. Louis suburb of Maryland Heights have told U.S. Sen. Roy Blunt (R) that they are ten times as likely to respond to a drug overdose as a fire. State Rep. Tracy McCreery, D-Olivette, tells Missourinet it’s critical for state lawmakers to approve the bipartisan PDMP bill.

“I think we need to do everything we can to make sure there are tool box in the tool chests for first responders. And this PDMP, I consider medical professionals first responders as well, and we need to get PDMP across the finish line,” McCreery says.

Rehder’s PDMP bill has had strong support from Democrats in both the Missouri House and Senate. It’s also supported by Senator Blunt and by U.S. Rep. Billy Long, R-Springfield.

Congressman Long visited Springfield’s Cox Medical Center South in June, describing the opioid epidemic as a “scourge.” He also noted that the opioid crisis is killing about 130 people a day nationwide.

Rehder will be serving her eighth and final year in the Missouri House in 2020, due to term limits.

Click here to listen to the full interview between Missourinet’s Brian Hauswirth and State Reps. Holly Rehder, R-Scott City, and Tracy McCreery, D-Olivette, which was recorded at the Missouri Capitol in Jefferson City on December 11, 2019:

A southeast Missouri state lawmaker who has championed prescription drug monitoring program (PDMP) legislation for years hopes to pass it in her final year in the Missouri House. 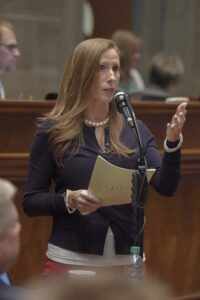 State Rep. Holly Rehder, R-Scott City, tells Missourinet she’ll prefile her PDMP bill in December. Rehder, who chairs the House Rules Committee, will be in her eighth and final year in the House in January, because of term limits.

Rehder has sponsored the legislation for years, citing the toll the opioid epidemic is taking on Missouri families.

The House approved her bipartisan bill in February by a 103-53 vote but the bill died in the Senate, primarily because of opposition from the Senate Conservative Caucus. Caucus members like State Sen. Denny Hoskins, R-Warrensburg, have privacy and other concerns with PDMP.

“I will be supporting it as I always have and trying to work with senators to finally put this issue behind us,” Schatz says.

During a Statehouse interview in May during the final day of the 2019 session, Schatz expressed disappointment the bill failed this year.

“But I will tell you that we will come back next year and I have three more years in this chamber (Missouri Senate). And I will work every year until we get that thing accomplished,” Schatz said that day.

U.S. Sen. Roy Blunt (R) has also called on the Legislature to pass PDMP, saying drug overdose is the leading cause of accidental death in Missouri and the nation.

Blunt addressed the Missouri House in April, noting that firefighters in the St. Louis suburb of Maryland Heights have told him they’re ten times as likely to respond to a drug overdose as a fire.