You are here: Home / Archives for Javon Belcher 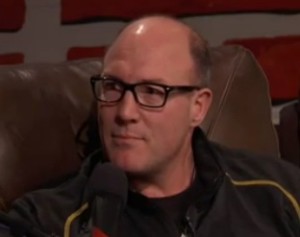 Scott Pioli during his appearance on the Dan Patrick Show.

Former Chiefs GM Scott Pioli appeared on the Dan Patrick Show on Tuesday and discussed the Jovan Belcher murder-suicide that took place on Dec. 1. Pioli told Patrick he needed professional help and said he’s not sure he’ll ever shake what he saw that day outside the Chiefs practice facility.

Patrick peppered Pioli with questions, trying to get Pioli to open up or at least offer up a better understanding as to why Belcher would do this, and I thought Pioli handled it well with his explanation.

“Every human being, I don’t care who you are, have these deep dark places and you don’t know, even those you’re most intimate with, there’s something you don’t know. Clearly there was something with Jovan that none of us knew.”

What I was also impressed with was that Pioli didn’t consider himself a victim and didn’t gloss over Kasandra Perkins, the victim in the murder, or the families who were affected.

“I saw something awful, but the reality is there are other victims…someone lost their daughter, lost their son…this is happening all over our country and that’s the bigger picture you have to look at.”

Sports Illustrated’s Peter King reported a story that seven NFL players have turned in their guns to NFL personnel this week after the Javon Belcher murder-suicide in Kansas City and at the Chiefs’ training facility. This report came during NBC’s Football Night in America.  According to King, at least one player surrendered multiple guns, telling the team that he doesn’t trust himself.

On recordings of 911 calls, Javon Belcher’s mother is pleading with her son’s dying girlfriend to stay alive after the Kansas City Chiefs linebacker shot her. Cheryl Shepherd made the call to 911 Saturday morning shortly after Belcher shot Kasandra Perkins at their home. Belcher then drove to Arrowhead Stadium and shot himself in the presence of Scott Pioli and Romeo Crennel.

Belcher’s mother says her son and Perkins were arguing and that he had left the house. Prior to that she tells dispatchers that Perkins is “just barely” breathing and that she is bleeding.

Kansas City police are saying the Chiefs organization was trying to help Javon Belcher and Kasandra Perkins through their domestic issues, but before taking his own life on Saturday morning, Belcher told GM Scott Pioli that the counseling wasn’t working.  According to 911 tapes released by police, Belcher shot Perkins three or four times. He then leaned over her and kissed her before saying sorry to his mother (who was in from New York visiting) and kissing his three month old daughter goodbye.

Belcher than drove to the Chiefs training facility where he spoke with Pioli, where according to police Belcher said, “I did it. I killed her.”

“He probably realized he had done something and he couldn’t go back,” Police Sgt. Richard Sharp, told the Kansas City Star.

Team officials knew of the troubles the couple was having and was doing everything possible to help. In the end, it didn’t matter. Head coach Romeo Crennel even pleaded with Belcher, but to no avail. Belcher said “I have to do this,” before kneeling behind his vehicle, making the sign of the cross and firing a bullet into his head.

On Monday, Crennel spoke about Belcher and how he is holding up during the ordeal.

SI.com is reporting that the night before Javon Belcher murdered his girlfriend and turned the gun on himself, he was in Kansas City Power and Light District with another woman and Belcher did not spend Friday night at his house that he shared with Kasandra Perkins.

From the article, written by Thayer Evans.

Belcher and the woman had become separated at some point and he went to her apartment in a complex in Kansas City, but she wasn’t there, the official said. According to two of the woman’s neighbors, Belcher was intoxicated and they let him stay in their apartment so he could get some sleep.

Belcher asked them to wake him by 6:30 a.m. so he could attend a team meeting later that morning, the official said. “I’ll get fined if I don’t make it,” Belcher told them.