You are here: Home / Archives for illegal gambling

The Missouri State Highway Patrol testified Thursday in Jefferson City that the number of complaints it’s received about illegal gambling has increased from 39 in 2018 to 145 so far this year. 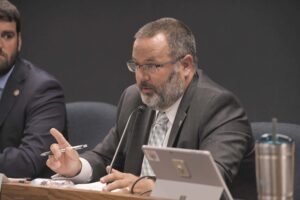 Most of those complaints are about alleged illegal slot machines. Highway Patrol Lieutenant Roger Phillips tells state lawmakers the Patrol’s Division of Drug and Crime Control (DDCC) only has two full-time investigators to handle these complaints.

“In recent months, we’ve had such a volume of complaints that we’ve had to pull investigators from other assigned duties to come and help investigate these complaints,” Phillips testifies.

“I think everybody is waiting to see once there’s a definitive statement I think you’ll find that there will be a lot more willingness to prosecute those cases,” says Sokoloff.

“It’s a good chance it’s going to end up over here (across the street at the Missouri Supreme Court in Jefferson City). There’s enough money on each side of this argument,” Shaul tells Sokoloff.

“Either side, win or lose, they’re both,” Shaul says. “Right,” Sokoloff responds.

Sokoloff tells lawmakers that all gambling is illegal in Missouri by the Constitution, unless specifically provided for.

The Missouri Gaming Commission has testified that any illegal gaming machines used in Missouri negatively impact casinos and the state Lottery, reducing taxes and funding for education and veterans.

The House committee’s next hearing will be its fourth, and is scheduled for October 24 at the Statehouse. It will be on sports betting.