You are here: Home / Archives for Carthage marching band festival

More than 70,000 people are expected to travel to the small southwest Missouri town of Carthage for Saturday’s 53rd annual Maple Leaf Festival, which celebrates the town’s glorious fall colors. 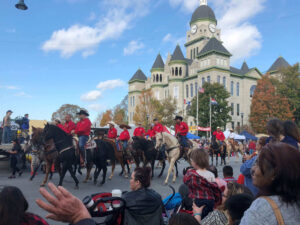 Carthage is known as the Maple Leaf City. While the festival is a month-long event, Saturday is the biggest day. Carthage Chamber of Commerce President Mark Elliff says the festival, which began in 1966 as a marching band competition, keeps growing.

“Back in the late 80’s I was involved in it and it was a big event then, but not nearly as big as what it is today,” Elliff says.

Saturday’s festivities begin bright and early with a 6 a.m. pancake breakfast, followed by the parade, the largest parade in southwest Missouri.

“It starts at 9 o’clock. Our goal is to have the parade over within two hours because you get beyond that people, I mean they love a parade, but they don’t love it more than two hours worth,” says Elliff.

The parade route is about two miles. There will be more than 150 entries in the parade, including floats and political figures. House Budget Committee Chairman Cody Smith, R-Carthage, will join Lieutenant Governor Mike Kehoe (R) in the parade. Elliff says Kehoe will be bringing a stagecoach on Saturday.

Chairman Smith tells Missourinet the Maple Leaf Festival is essentially a local holiday in Carthage. The town of 14,000 is northeast of Joplin.

Elliff says volunteers are key to the festival’s success. Carthage firefighters make the pancakes, while the Rotary Club cooks brats on the town square, for scholarships.

“We actually start in February of each year beginning the planning,” Elliff says.

Click here to view the entire schedule of events for the Maple Leaf Festival.

Click here to listen to the full interview between Missourinet’s Brian Hauswirth and Carthage Chamber of Commerce President Mark Elliff, which was recorded on October 17, 2019: