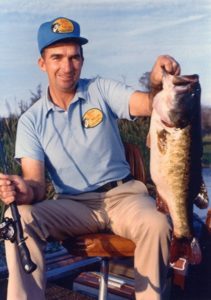 Charlie Campbell, a hall of fame bass fisherman originally from Ava, Missouri died. He was 87.

Campbell won the BASS Federation National Championship in 1974 and three years later started working at Bass Pro Shops where he helped design the Bass Tracker Boat for Johnny Morris. Charlie was inducted into the Drury University Hall of Fame, the Missouri Sports Hall of Fame in 2003, and the Bass Fishing Hall of Fame in 2008. The Missouri House of Representatives named Campbell an “Outstanding Missourian.” Campbell graduated from Ava High School in 1951 where he starred in four sports. He also won a state title in 1973 as a basketball coach at Forsyth High School and was honored as the coach of the year in the state of Missouri.

Campbell also field tested all of the Bass Pro’s products, served in the public relations department and began participating in many national seminars throughout the U.S., while also assisting with and participating in a variety of national fishing tournaments.