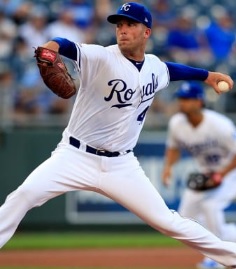 (Kansas City, MO)  —  Jorge Soler drove in three runs and the Royals held on for a 7-5 win over the White Sox in Kansas City.  Whit Merrifield reached base five times with three singles and two walks.  Danny Duffy picked up the win, allowing two runs over six innings.  Kansas City is 5-and-1 since the All-Star break.  AJ Reed hit a three-run homer in the Chicago ninth to close the gap.  Ryan Goins also blasted a two-run homer in his Sox debut.  Ivan Nova walked five and yielded six runs in less than five innings to absorb the loss.  Chicago has lost six in-a-row.

(St. Louis, MO)  —  Paul Goldschmidt smacked a go-ahead, three-run homer in the seventh inning to lift the Cardinals past the Pirates 6-5 in St. Louis.  Tyler O’Neill hit a solo shot in the fifth and drove in two for the Redbirds, who took two-of-three in the series.  John Brebbia picked up the win and Carlos Martinez notched his sixth save despite allowing a run in the ninth.  Starling Marte homered and Bryan Reynolds knocked in three runs for the Bucs, who are just 1-and-5 since the break.  Francisco Liriano suffered the loss in relief.

>>Cubs Cruise Past Reds Behind Darvish

(Chicago, IL) — Yu Darvish fired six innings of two-hit, scoreless ball to lead the Cubs past the Reds 5-2 in Chicago. Darvish struck out seven as he moved to 3-and-4 on the year and earned his first win at Wrigley Field as a Cub. Craig Kimbrel closed it out for his fourth save. Kris Bryant homered in the first inning and Addison Russell went deep in the second for the Cubs, who took two-of-three in the series. Jason Heyward added a two-run double in the seventh to stake the Cubs to a 4-0 lead. Nick Senzel and Yasiel Puig plated runs in the eighth inning for the Reds, who are 2-and-4 since the break. Sonny Gray gave up two runs in six frames as he fell to 5-and-6.

(Milwaukee, WI) — The Brewers built a 5-0 lead and held on for a 5-4 win over the Braves in Milwaukee. Manny Pina hit a two-run homer and drove in three and Christian Yelich also went deep as the Crew took two-of-three in the series. Chase Anderson pitched one-hit, scoreless ball into the sixth for the win. Josh Hader permitted two unearned runs in the ninth, but held on for his 21st save. Josh Donaldson hit a two-run homer in the eighth and a two-run single in the ninth for Atlanta, which is 4-and-2 since the break. Dallas Keuchel took the loss.

(Baltimore, MD) — Trey Mancini homered twice and drove in three runs and the Orioles scored eight times over the seventh and eighth innings to beat the Nationals 9-2 in Baltimore. Rio Ruiz and Anthony Santander each drove in two runs. Gabriel Ynoa picked up his first win of the season as Baltimore snapped a three-game skid. Adam Eaton drove in both Nationals’ runs. Wander Suero retired only one of the five batters he faced and three scored in the seventh inning to take the loss. Washington had won five of its previous six games.

(Philadelphia, PA) — David Freese clubbed a go-ahead, two-run homer in the seventh inning as the Dodgers dumped the Phillies 7-2 in rainy Philadelphia. Justin Turner padded the lead with his own two-run shot in the eighth. Six Dodgers’ pitchers combined to give up two hits and two runs, with Pedro Baez earning the win. Los Angeles is an MLB-best 64-and-34. Brad Miller and Adam Haseley drove in runs for the Phils. Reliever Juan Nicasio gave up the homer to Freese and took the loss. The Phillies have dropped four-of-six since the All-Star break.

(Arlington, TX) — The Diamondbacks scored 12 runs in the first two innings as they took down the Rangers 19-4 in Arlington. Eduardo Escobar homered twice and picked up five RBI for Arizona. Kevin Cron went yard and finished with four RBI. Jarrod Dyson and Carson Kelly also went yard for the D’backs. Robbie Ray pitched six innings of four-run ball for the win. Arizona has won six of its last eight. Danny Santana homered twice and Logan Forsythe reached the seats for Texas. Jesse Chavez gave up seven runs and didn’t make it out of the first inning for the Rangers, who lost their fourth straight.