(NASCAR)—Clint Bowyer’s bid for the lead in a 200 mph effort to outrun looming rain triggered the always-expected big crash at Daytona, wiping out most of the top drivers and leaving Justin Haley the declared winner in only his third top-level NASCAR race. 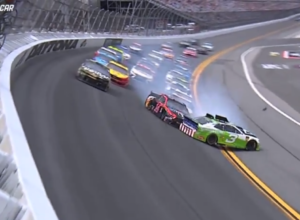 Bowyer, (in the red car) moved inside to pass leader Austin Dillon, who appeared to move to block him, leading the two cars to collide at the front of the field, collecting sixteen other cars in the melee.

“I guess he didn’t want me to pass him,” said Bowyer later. He and Dillon had fought for the lead for several laps before the crash. “I was being aggressive and trying to keep the lead. That’s what you get,” Dillon told NBC after being checked at the infield care center.

Kurt Busch made it through the carnage, albeit with some damage, but led until the field was told the green flag would come out in one more lap. That’s when he and several others hit the pits, leaving Haley in the lead. NASCAR changed its mind about resuming the race when lightning struck within seven miles of the Daytona Speedway.

NASCAR guidelines call for races to be stopped when lightning is spotted close to the track. Busch was eighteenth when a second rainstorm struck the track and NASCAR called the race.

Haley’s victory will not lock him into one of the sixteen spots for NASCAR’s championship playoffs because he is not racing for points in the sports top series. He is running fulltime in the subsidiary series where he is eighth in the standings.

NASCAR is at Kentucky next weekend.

IndyCar and Formula 1 were idle this weekend. Indycar races at Toronto next Sunday. Formula 1 moves to Silverstone, England for the British Grand Prix.