A U.S. Senate committee has passed a $4.5 billion emergency border funding bill to care for kids crossing the southern border illegally and without their parents. The full U.S. Senate is expected to debate the bipartisan legislation next week. Missouri U.S. Senator Roy Blunt, who chairs the committee, says the funding problem must be solved soon. 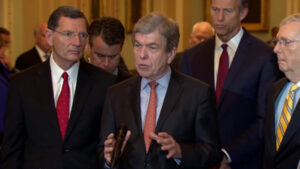 “We have to take care of these kids,” says Blunt during a GOP press conference. “We are out of appropriated money to do it.”

Blunt, a Republican, says the measure does not include funding for additional wall at the U.S.-Mexico border. He says the money would be used to care for the unaccompanied kids, process the children arriving, expand the number of detention beds and worker overtime.

“At some point very quickly, we will be basically asking the contractors, groups like Lutheran Family Services and Catholic Families Services, to just do this for free and at some point in the future we’ll pay you. That obviously doesn’t work,” says Blunt.

Whether the U.S. House will go along with the deal is unknown.