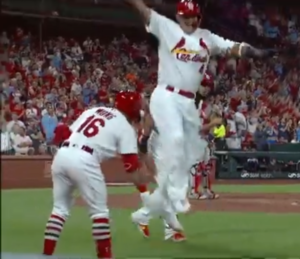 (St. Louis, MO)  —  The Cardinals used three home runs and a stellar outing from Miles Mikolas to beat the Phillies 6-0 in St. Louis.  Yadier Molina and Paul DeJong hit two-run homers and Matt Carpenter added a solo shot for St. Louis, which snapped a four-game skid.  Mikolas allowed three hits over seven innings for his fourth win.  The Cards are now 13-and-4 at home.  Vince Velasquez took the loss for Philadelphia.  The Phillies managed just five singles and didn’t get a runner into scoring position until the eighth.

(Houston, TX)  —  Robinson Chirinos erased a 4-3 deficit with a two-run homer in the sixth inning and the Astros went on to beat the Royals 6-4 in Houston.  George Springer added an RBI double in the eighth as the ‘Stros won their third straight.  Springer and Carlos Correa connected for early home runs for Houston.  Gerrit Cole struck out nine over six-and-a-third innings of four-run ball for the win.  Jakob Junis was touched for five runs in five and a third frames to take the loss.  Adalberto Mondesi and Hunter Dozier homered for KC, which has lost four-of-five.

(Chicago, IL)  —  The Marlins put up three runs in the ninth inning to rally past the Cubs 6-5 at Wrigley Field.  Rosell Herrera walked with the bases loaded to tie the game before Miguel Rojas and Martin Prado plated runs to give Miami a 6-4 lead.  Jon Berti homered for the Fish, who snapped a three-game skid.  Adam Conley picked up his first win and Sergio Romo his sixth save.  Kris Bryant went deep in the ninth to pull the Cubs within one.  Anthony Rizzo hit a two-run homer in the first inning for Chicago, which saw its seven-game winning streak come to an end.  Pedro Strop blew the save and took the loss.

(Milwaukee, WI)  —  The Brewers scored three runs off the Nationals’ bullpen in a 5-3 win in Milwaukee.  Yasmani Grandal tied the game with an RBI single in the seventh and Jesus Aguilar put Milwaukee ahead with a sac-fly.  Ben Gamel singled in an insurance run in the eighth for the Brew Crew, which has won four-in-a-row.  Alex Claudio got the win and Junior Guerra his second save.  Dan Jennings took the loss in relief of Max Scherzer, who struck out 10 over six innings of two-run ball.  Howie Kendrick and Adam Eaton homered for Washington, which has lost six-of-eight.

(Cleveland, OH)  —  Yoán Moncada had a two-run homer and four RBI to lead the White Sox to a 9-1 victory over the Indians in Cleveland.  Ivan Nova notched the win with seven innings of one-run ball for Chicago which ended a three-game skid.  Jason Kipnis drove in Cleveland’s only run with a fifth-inning single.  Trevor Bauer took the loss after allowing eight runs on 10 hits in five innings.  The Tribe has lost two in-a-row.

(Toronto, Ontario)  —  Martin Perez and two relievers combined on a three-hitter as the Twins bashed the Blue Jays 8-0 in Toronto.  Perez struck out nine over seven innings of two-hit ball to move to 5-and-0 with the win.  Eddie Rosario and Jason Castro both homered and drove in three runs apiece for Minnesota, which has won eight of its last 11 to lead the AL Central at 21-and-12.  Jorge Polanco also went deep in the victory.  Marcus Stroman fell to 1-and-5 for the Jays, who have lost three in-a-row and six of their last seven overall.