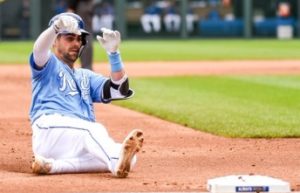 (Kansas City, MO)  —  Brandon Lowe belted a go-ahead two-run homer in the top of the ninth inning to lift the Rays past the Royals 3-1 in Kansas City.  Guillermo Heredia tied the game with an RBI-single in the fifth for Tampa Bay, which earned a split of the four-game series.  Adam Kolarek picked up the win and Diego Castillo notched his fourth save.  Whit Merrifield tripled in the lone run for KC in the third inning.  Wily Peralta suffered the loss.

(Washington, DC)  —  Stephen Strasburg struck out nine while pitching one-run ball into the seventh inning in the Nationals’ 2-1 win over the Cardinals in Washington.  The Nationals scored their runs in the fourth after a Yairo Munoz throwing error and when Brian Dozier grounded into a double play.  Sean Doolittle earned a four-out save as Washington ended a three-game skid.  Dakota Hudson took the loss, giving up two runs, one unearned, over six innings.  Kolten Wong had a RBI-single in the third for St. Louis, which had its five-game winning streak snapped. 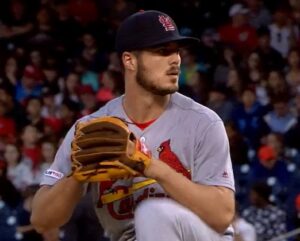 (Chicago, IL)  —  The Cubs open a three-game series against the rival Cardinals today at Wrigley Field.  Kyle Hendricks opposes St. Louis’ Jack Flaherty.  Chicago has won four straight and 11 of its last 14 games.  The Cardinals hold a 2.5 game lead over the Cubs in the Central Division.

(Milwaukee, WI)  —  Nolan Arenado smacked a two-run homer in the second inning as the Rockies bashed the Brewers 11-6 in Milwaukee.  Mark Reynolds had a three-run double in the first as Colorado built an early 7-0 lead.  David Dahl and Raimel Tapia both had three hits including a home run as the Rockies earned a split of the four-game set.  Jon Gray pitched into the sixth inning for the win.  Ryan Braun homered and drove in two for the Crew.  Freddy Peralta was pounded for nine runs, six earned, in four frames as he fell to 1-and-1.

(Minneapolis, MN)  —  Jason Castro homered, drove in four runs and scored twice as the Twins hammered the Astros 8-2 in Minneapolis.  Byron Buxton tripled in a run and scored during a six-run fourth inning for the Twins, who took three-of-four in the series.  Jose Berrios tossed seven innings of two-run ball for the win as he moved to 5-and-1 on the year.  Alex Bregman went deep and Tony Kemp knocked in the other run for Houston.  Brad Peacock was pounded for seven runs in less than four frames to suffer the loss.

>>Syndergaard Does It All As Mets Blank Reds

(Flushing, NY)  —  Noah Syndergaard homered and tossed a complete game shutout to lead the Mets to a 1-0 win over the Reds in New York.  Syndergaard struck out 10 while giving up just four hits and a walk as he moved to 2-and-3 with the victory.  His solo home run in the third inning was all the offense for either side as the Mets earned a split of the four-game set.  Tyler Mahle allowed one run in five frames to fall to 0-and-4 with the tough-luck loss.  Cincinnati finished 3-and-4 on its road trip to St. Louis and New York.