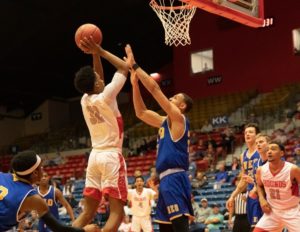 Moberly Area Community College opened with a first-round win in the National Junior College Athletic Association’s championship with an 82-73 victory over NE Oklahoma A&M.  The Greyhounds have a second-round game Wednesday evening against third-seeded Vincennes. Alonzo Verge led Moberly with 25 points.  He was one of four players to score in double figures.