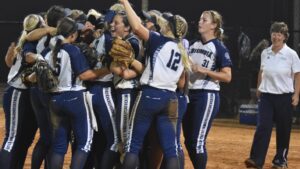 The Cougar softball team had a quick celebration this morning before heading back to the hotel to get some rest since they defeated Southern Oregon University (SOU), giving them the chance to play for the National Title Thursday afternoon. The game that started after 1:00 a.m. local time concluded at 2:55 a.m. and improved the Cougars’ record to 37-15 on the season. The tenth seeded Cougars defeated the sixth seeded Raiders 6-2, ending their season at 51-15, which is the best season in team history for SOU.

After another long day of delays, the Cougars finally took the field Wednesday night to finish their game against the Drovers of USAO in the winner’s bracket championship. The comeback from the Cougars fell short as they dropped their first postseason game this year, pushing them into the loser’s bracket. Columbia then had to sit and wait for SOU to take down second seeded and two-time defending National Champions Oklahoma City University 3-2 before taking the field again.

Despite both teams being exhausted, the Cougars remained energized and ready to play, knocking in three runs in the top of the third to get on the board first. After back-to-back singles by Rachel Sullivan and Dakota Newton, Molly Carter worked her way into a walk to load the bases. A deep single by Alexandra Linck scored Sullivan and Newton and Carter would come across to score on a single by Natalie Dummitt. The Raiders responded immediately though, scoring two runs on three hits in the bottom of the third, putting the pressure on Columbia.

It wasn’t until the sixth inning before the Cougars were able to put insurance runs on the board after Karli Leeper and Newton notched doubles and Sullivan and Carters knocked singles, scoring three runs that would prove to be enough for the win.

Lexi Dickerson (16-4) got the win in the circle as she allowed six hits, two runs, and struck out two batters in her seven innings of work. Offensively, Rachel Sullivan, Dakota Newton and Alexandra Linck each posted two hits in the victory.

The NAIA Softball World Series is a double elimination tournament, meaning that the Cougars will have to beat the Drovers twice on Thursday afternoon to win the title. Game time is slated for 12:30 p.m. CST on Thursday, May 31 in Clermont, Florida.