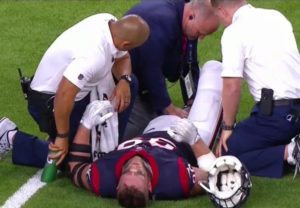 The Chiefs put on another display off offensive fireworks as they blew past the Texans, 42-34, in Houston.

Alex Smith threw for 324 yards and three touchdowns to key Kansas City, and rookie Kareem Hunt surpassed 100 rushing yards.  Charcandrick West caught a pair of scores and Tyreek Hill returned a punt 82 yards for a touchdowns. The Chiefs are the NFL’s lone unbeaten team at 5-and-0.

Texans rookie quarterback Deshaun Watson threw for five touchdowns in defeat, including three in the final quarter.  DeAndre Hopkins finished with three TD’s and Will Fuller the Fifth added two as Houston dropped to 2-and-3.  Watson has accounted for 10 touchdowns over his past two games, including nine through the air.

NFL RECORD ALERT:  Kareem Hunt, 107 yards rushing. He becomes just the second rookie in the NFL to have 100 yards from scrimmage in each of his first five games.  Adrian Peterson was the first.

J.J. Watt broke his leg.  The three-time Defensive Player of the Year, was injured in the first quarter and the team announced that he sustained a tibial plateau fracture.

The Chiefs will try to come full circle next week when they host Pittsburgh.