(NASCAR)—Joplin driver Jamie McMurray was able to make his old tires stand up for a top-ten run on the Watkins Glen road course, but he couldn’t quite stretch his fuel supply to the end.  McMurray, running second with thirty-seven laps to go after a fuel-only pit stop, was still in the top ten when he had to make a splash-and-go stop for fuel with only four laps left, and finished fourteenth. 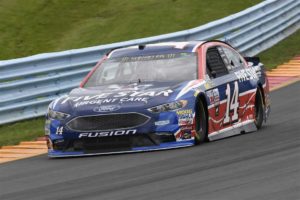 Clint Bowyer, who had come out of the pits right behind McMurray on the fifty-third lap, was able to stretch his fuel long enough to come home fifth behind winner Martin Truex—who won his fourth race of the year—a fast-closing Matt Kenseth, rookie Daniel Suarez (the replacement in the 19-car for Columbia’s Carl Edwards), and Denny Hamlin.

McMurray, however, remains in the hunt for a spot in the ten-race playoffs that begin after four more races.  Thirteen drivers have locked in positions with victories. McMurray, Chase Elliott, and Kenseth are in the last three positions on points.  Bowyer is the first driver outside the top sixteen, twenty-eight points behind Kenseth, thirty-four points behind McMurray. 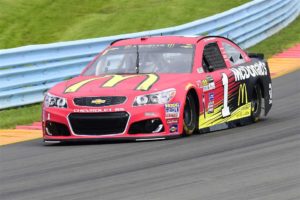 McMurray is clinging to his playoff position although he has just one top five finish in the last dozen races.  Bowyer has five top tens in the last seven races.

NASCAR is at Michigan International Speedway next weekend.  McMurray was fifth in the last race there, Bowyer twenty-eighth.  But he’s been in the top ten four out of the last five times he’s run there, although he’s never won.  Bowyer’s best finish in his last four races at Michigan is 23rd.

(IndyCar)—IndyCar take to the track next on August 20, at Pocono. 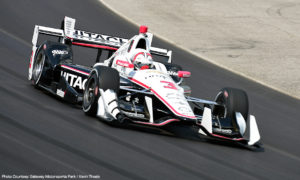 We’re less than three weeks away from the closest IndyCar race Missourians can get to before the end of the season.  And eight drivers who tested the new surface at Gateway Motorsports Park just east of St. Louis like the brand-new surface a lot.  Testing in May turned up some problems with the track surface, prompting owner Curt Francois to have an entirely new surface put down.  “Smooth like a baby’s bottom,” said Helio Castroneves. “Really grippy and..a lot faster,” reported Conor Daley, who tested there in May.  The race starts at 8 p.m., Saturday, August 26.

Drivers Juan Pablo Montoya and Oriol Servia tested the 2018 aero kits last week at Mid-Ohio and again found a lot to like with the new package.  The run on the road course was the first time they ran in tandem to see how the new air flow off the front car affects handling of the trailing car.

(Formula 1)—Formula 1 takes a month off at this time of year. Drivers return August 27 for the Belgian Grand Prix.