(NASCAR)—Having the fastest car is not an uncommon thing for Kevin Harvick, who dominated the 500-mile race at Atlanta until he was too fast.  Harvick was caught speeding at the start of his final pit stop.  He held his lead coming out of the pits but had to go to the back of the longest line on the restart with a dozen laps to go.

The race went to Brad Keselowski, who passed Kyle Larson with seven laps left and held him at bay to the end. Keselowski had dropped far back in the field when he had to make an extra pit stop early in the race to tighten lug nuts on his left rear wheel but worked his way back into contention by the final caution flag-induced pit stops.

Harvick led 292 of the 311 laps before the fatal pit stop.  He rallied from 18th when racing resumed to finish ninth when the checkered flag fell after 325 laps.

Joplin driver Jamie McMurray ran strongly all day, often in or near the top five.  He finished tenth, one position ahead of Clint Bowyer, whose sold run throughout the race was jeopardized late when some paint-trading with a competitor and contact with the wall led to a flat tire that sent him to the pits.  NASCAR rules require any body damage repairs to be completed in the pits within five minutes or the car has to leave the race.  Bowyer’s crew did the job and got him back into the race without losing a lap.

Daniel Suarez, who took over Carl Edwards’ car, stayed out of trouble and finished 21st in his second NASCAR Cup race.  Edwards had gone to Atlanta, one of his most successful tracks, to work with Suarez in preparation for the race. “He doesn’t have to have me here,” said Edwards. “I’m only an addition to what he’s already got, and its only because he wants me here.  I definitely don’t want to get in the way.” Edwards said he’s not a “hanger-on type of guy,” and said, “I think very quickly I’ll be out of the picture because it’s his team. He’s proven himself.”

(INDYCAR)—How would you like to own an IndyCar?  And a transporter to haul it in?  And a whole bunch of other stuff?

Your chance will be March 27 when KV Racing auctions off its remaining assets in Indianapolis.  KV has been owned by former CART champion Jimmy Vasser and Kevin Kalkhoven, an Australian businessman who, at 72, says he can no longer give the time and energy to the team that it needs.   KV Racing owned the car that Tony Kanaan drove to an Indianapolis 500 victory in 2013 and racked up six other series victories in its fourteen years of operation.

Want to look at the catalog?  Here: http://www.keyauctioneers.com/kvracingindycar/

Some of the KV equipment has been sold to Juncos Racing, which will field a car in this year’s 101st running of the Indianapolis 500.  Juncos immigrated to the United States fifteen years ago from Argentina after, he said, he lost everything in an Argentinian depression and got a job as a  go-kart mechanic.  He has fielded successful teams in two IndyCar feeder series, the Mazda Road to Indy, and Indy Lights.  His teams have won 41 races, 45 poles, and the 2015 Indy Lights championship with Spencer Pigot, now running IndyCar.

IndyCar starts its season next Sunday with a street race at St. Petersburg, Florida.

(Formula 1)—Formula 1’s cars will have new looks this year with wider tires, bigger and relocated wings, and other features.  Four days of test sessions at Barcelona indicate the forecast for faster cars will come true, noticeably.

This will be the second year for the American-owned Haas Formula 1 team.  Romain Grosjean returns but Kevin Magnussen replaces Estaban Gutierrez in the second car. 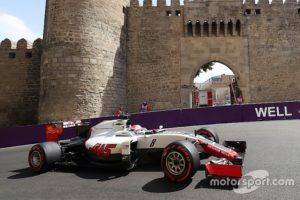 Haas co-owns a NASCAR team with Tony Stewart.  The team finished eighth in the constructor’s points standings last year with five top-tens, all by Grosjean, in the 21 F1 races.  The cars use Ferrari engines.

Previous Post: « Missouri State battles, but comes up short to Wichita State at Arch Madness
Next Post: Sterk asks Anderson to step down. »