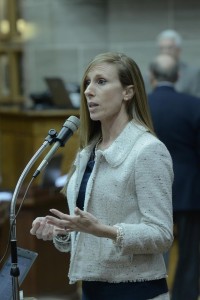 A prescription drug monitoring program would allow doctors and pharmacists to monitor how many prescriptions people are having filled, to look for cases of abuse. Rehder has been working on this legislation all five years that she’s been in the House. Missouri is the only state in the nation without this program.

Rehder wants to help prevent other families from going through the heartache that has wreaked havoc on her family’s life. Her daughter, Raychel, had everything going for her in high school. She was an honor roll student and had been accepted to Saint Louis University’s physical therapy program.

When Raychel was 17 years old, she sliced her thumb open while working. She went to the emergency room. A doctor stitched her up and gave her a prescription for an opioid. That drug took hold of her and her life soon spiraled out of control.

Raychel’s drug addiction was so bad that she eventually resorted to bath salts and meth. She served 120 days in prison in what is often referred to as “shock time”.

“With Raychel, prison was a welcome moment for us. I can’t tell you how many nights I laid in bed and I didn’t know if she was alive or dead. When your child is on this, there is zero control. You see that they have got to have help but you cannot help them,” says Rehder. “One night she called me in the middle of the night crying and screaming and said her boyfriend was after her and she was hiding in somebody’s shed and then the line went dead. Those are the things, that as a mother, it’s a terrifying rollercoaster with an addict for a child.”

Raychel was also addicted to opioids while pregnant with her son. Rehder’s grandson, who is now seven years old, has had no adverse health effects from his mother’s drug use.

It’s been thirteen years of ups and downs for Rehder’s family and several trips to rehab worth thousands of dollars.

“The money that we have spent dealing with her addiction and the pain and heartache watching my grandson go through and watching my daughter go through, I would spend that again in a minute,” says Rehder.

Raychel, now 31, has her life back on track. She’s laughing again and is back to being the bubbly woman she was before drugs took her down. She has been clean for two years and Rehder’s son has been clean of opioids and heroin for one year.

Rehder has stayed the course as a no-nonsense mother throughout her family’s struggles.

“I’m the mom who makes my kids come in and kiss me when they get in at night so I can smell their breath. You’re not getting crap by on me. I do drug testing,” says Rehder. “My middle son told me ‘mom I can tell you that it helps me that you do random drug testing because when my friends are passing a joint, I’m like y’all know my mama’s crazy. She would drug test you too.’”

Rehder’s legislation is expected to come up soon in the House. If it makes it to the Senate, it faces an uphill battle. Senator Rob Schaaf (R-St. Joseph) could attempt to block it because he says it doesn’t protect people’s privacy.